NESE, Thought Dead, Rises from the Depths of Loch Jersey

If you NESE was dead and all we’d ever see is a corpse on the New Jersey shore, you were wrong. The project is very much alive and again in front of NJ-DEP.

NESE lives. Many thought it was dead and had sunk to the bottom of Raritan Bay to feed the fishes, but then a new revised application was quietly filed with the New Jersey Department of Environmental Protection last month. 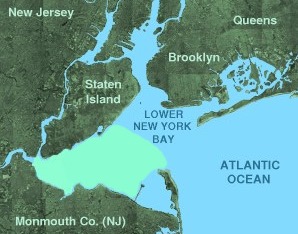 Here’s the word on NESE from NJ-DEP:

The revised NESE application package may be accessed here and if you want to see the details, check out the wetlands portion of the submission, for example. It is chocked full of facts, science, legal arguments and other information that stands in bright contrast to the shallow hyperbolic assertions of fractivists such as this one, courtesy of the Associated Press:

“Nasty NESE is back for an unbelievable fourth time, and the environmental impacts of this unnecessary, climate-changing project will still be severe and devastating,” said Cindy Zipf, Clean Ocean Action’s executive director. “They’re trying to wear us down. We will not give up. We have too much to lose: our ocean, bay, air, and coastal economy and communities.”

One hopes NJ-DEP does the right thing. We know this much from the application:

Since its initial applications filed in June 2017, Transco has continually improved the Project by reducing impacts to wetlands, transition areas, and riparian zones. Specifically, over the course of this permitting process, Transco has reduced permanent wetlands impacts by 3.583 acres, bringing the total permanent wetlands impacts associated with the entire Project to just 1.179 acres. Similarly, taking into consideration the Department’s acceptance of the barred owl sighting in April 2019, wetland transition areas have been reduced from 4.186 acres to 1.630 acres, and riparian zone impacts have been reduced from 2.754 acres to 1.734 acres.

Yes, we’re talking about minimal, nearly irrelevant, impacts that are fully mitigated. Will it be approved? We’re dealing with a Murphy Administration, after all. But, there are also Federal courts and new precedents and new rules, so we’ll see. Just to know NESE lives is nonetheless exciting!