On July 18, 2019, Governor Cuomo signed into law the Climate Leadership and Community Protection Act (“Climate Act”). It is among the most ambitious climate laws in the world and requires New York to reduce economy-wide greenhouse gas emissions 40 percent by 2030 and no less than 85 percent by 2050 from 1990 levels. The law creates a Climate Action Council (CAC) charged with developing a scoping plan of recommendations to meet these targets.  This post summarizes the third meeting of the Council.  Summaries of other meetings are available here.

I am following the implementation of the Climate Act closely because its implementation affects my future as a New Yorker.  Given the cost impacts for other jurisdictions that have implemented renewable energy resources to meet targets at much less stringent levels, I am convinced that the costs in New York will be enormous and my analyses have supported that concern.  The opinions expressed in this post do not reflect the position of any of my previous employers or any other company I have been associated with, these comments are mine alone.

According to the Climate Action Council website: “The New York State Climate Action Council is a 22-member committee that will prepare a Scoping Plan to achieve the State’s bold clean energy and climate agenda”.  The co-chairs and ten of the members are representatives of state agencies and authorities.  The remaining ten members were chosen by politicians. Advisory panels and the Just Transition Working Group will help develop the scoping plan.

The meetings provide insight to the direction of the massive energy transition required by the Climate Act.  The meetings are run formally with a role call at the beginning, approval of minutes, and votes on any decisions.  The following is a description of the meeting and my impressions.  Meeting materials are provided here:

These remarks start at the 10:20 mark in the meeting recording. The political nature of this meeting is nowhere more evident than in this agenda item which included five slides: Isaias: A call for resilience, Going Big on Large-Scale Renewables (see example slide below), Investing nearly $1 billion in energy efficiency for low- to moderate-income households, Cleaning New York’s vehicle fleets, and Ensuring climate justice.  Clearly, these remarks are scripted for the co-chairs to read and are crafted to reflect well on Governor Cuomo’s energy agenda. 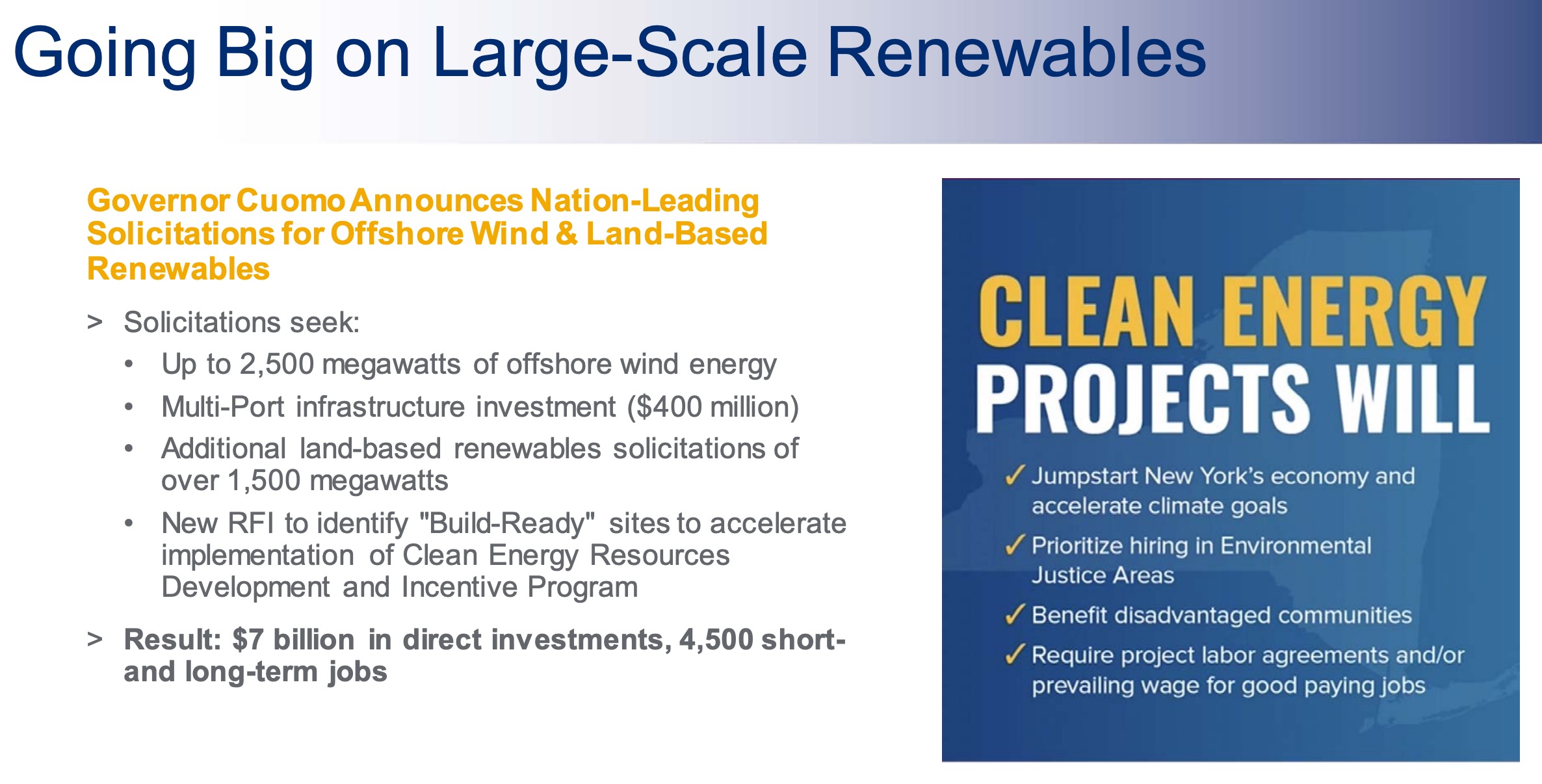 The meeting was held soon after the remnants of Isaias passed through the state and Co-Chair Doreen Harris said that: “As the Governor himself stated, the worst of this situation was avoidable”.  This slide concluded with a clarion call: “We must be better prepared and adapt/improve our overall resilience”.

As is usual for the Cuomo administration, the impacts of this weather event were attributed to climate change.  The reality is that even if it was possible to tease out the potential effect of climate change on the storm’s wind and rain impacts, the impacts without climate change would have caused power outage problems.  It is unclear how the worst of this situation could be avoided.  If your goal is to reduce power outages as much as possible then you could place power lines underground but those costs are on an order of magnitude greater than the costs of overhead wires.  There is no possibility that GHG emission reductions made in New York will affect power outages because the possible effect on global warming is immeasurable.

The next three slides glowingly described progress on the energy initiatives of New York.  The real meat of this meeting started with a description of the startup of the Climate Justice Working Group.  This is one of the support committees for the CAC.  This particular one will consult with the Council on climate justice.

In addition to the Climate Justice Working Group, the council has a mandate to convene advisory panels “requiring special expertise and, at a minimum, shall establish advisory panels on transportation, energy intensive and trade-exposed industries, land-use and local government, energy efficiency and housing, power generation, and agriculture and forestry”. The panels will provide “recommendations to the council on specific topics, in its preparation of the scoping plan, and interim updates to the scoping plan, and in fulfilling the council’s ongoing duties”.  The members for the mandated working groups were announced at this meeting.  I will not comment here on the members proposed.

The transition to a new energy system is complex and clearly special expertise is needed.  The concept that the CAC would need this support when defining the plan for the transition is obvious.  However, it is not clear who decided on the proposed membership.  Based on the discussions I got the impression that people were nominated either by members of the CAC or by other stakeholders.  It was also clear that some people who were nominated did not get included.  The promise by the co-chairs that someone would take another look does not give me confidence that everyone will be satisfied.

There is another procedural issue.  The Climate Act specifies that there will be “no more than five voting members” in each advisory panel.  The nominated members for the advisory panels were larger: transportation (15), energy intensive and trade-exposed industries (12), land-use and local government (10), energy efficiency and housing (13), power generation (14), and agriculture and forestry (17).  It appears that there is a wide variation in the backgrounds of the members and I suspect that will result in differing opinions for recommendations.  How that will play out with the voting member criterion is not clear.

The presentation discussed how the advisory panels are expected to operate and their work products.  Frankly, the commitments to do this work are so significant that my expectation is that the process support staff described will do most of the work.  For example, in the “next steps for the advisory panels” slide they have been asked to organize a meeting in the first half of September to develop a work plan that includes:

Just getting something all down on paper for consideration of the work plan is more than I would expect any individual member to have the time or expertise to do.  Presumably agency staff will to that preparation work.  However, the initial draft certainly guides the direction of the work plan.

The presentation also noted that the panels shall “seek public input to inform the development of recommendations to the Council for consideration”, “provide transparency by making meetings open to public viewing or/and publishing minutes of deliberations”, and make available information regarding advisory panel public meetings and comment opportunities on the climate.ny.gov webpage.”

While I hope they follow through on that promise, considering public input adds to the work load of panel members.  Moreover, there is no apparent mechanism with the CAC process to handle public input.  For example, there isn’t any reference to public input documentation.  Later in the meeting this issue was raised and Commissioner Seggos backed off public viewing for all meetings.

The timeline for the draft scoping plan is ambitious.  The work plans are supposed to be completed in mid-October.  Recommendations, development and outreach follow in five months so that the panels can make their proposals to the CAC in mid-March.  All the work is supposed to be integrated in three months for a target integrated draft in mid-June 2021.  Three months of draft review are followed by three months to “Prepare to issue draft scoping plan” ending in December 2021.

At the conclusion of this section of the meeting, after giving the CAC members a list without any documentation of the members other than their affiliation they were asked to approve the memberships.  I hope this rubber stamp approval approach is not a taste of what is to come in this process.

The Climate Act does not specifically mandate an advisory panel for waste management even though it historically represents 8% of statewide emissions.  Commissioner Seggos from the Department of Environmental Conservation (DEC) proposed setting up a core team at DEC (air resources and material management) to operate like an advisory panel rather than setting up another advisory panel.  CAC members were worried that there would not be as much opportunity for public input.  I am not sure how much practical difference this will make because agency staff will do much of the work anyway.

A couple of progress reports on state activities were described.  Of more interest to me was the discussion of DEC’s proposed Part 496.  A key part of the Climate Act is defining the baseline 1990 emission inventory and I have posted a couple of times on it:  one post looked at the emissions report timing by looking at the effect of four key considerations imposed by the CLCPA, and another post discussed the implications of two key requirements in the Climate Act.

The presentation noted that upstream emissions from fossil fuels and using a 20-year Global Warming Potential as mandated by the Climate Act were responsible for most of the increase from the prior NYS GHG Inventory baseline: 236.19 million metric tons (MMT) CO2e to 401.38 MMT.  During the development of the regulation DEC assumed that the emission limits should be based on 1990 gross emissions not net emissions because the 2050 target is an 85% reduction and net zero goal.  DEC had to use a bottom up inventory for 1990 because there wasn’t a top down inventory available.  CAC member Robert Howarth said they should use top down.  DEC and NYSERDA are working on the annual inventories now.

I sensed that there was some frustration amongst the CAC members that they might not be able to manage what they see as their charge.  I sympathize with some of their concern because it is not clear how decisions will be made.  Nobody explicitly said how the members were chosen for the advisory panels but if I had to guess I would bet a lot of money that it was made by Cuomo’s minions.  Clearly putting the future of our energy system in the hands of people chosen more on political optics than their expertise is a recipe for problems.

On the other hand, some of the whining about lack of input was made by people with agendas.  That makes the situation even worse.  Decision making with an over emphasis based on environmental ideology is certain to end badly.  I will address this concern more in a future post.

Reposted from the Pragmatic Environmentalist of New York blog, the publisher of which has given permission to use this.