[Editor’s Note: The UDRBC, together with EnviroVentures, reward two students with agricultural and natural gas related scholarships for their writing and achievements.]

The Upper Delaware River Basin Citizens Scholarship Committee was pleased to announce the recipient of the 2021 UDRBC Agricultural Scholarship Award.  Honesdale High School senior Emma Diliberti, daughter of Perry and Barbara Diliberti of Honesdale, was awarded the $1000 scholarship in recognition of her continued commitment toward the preservation of farming for future generations in Wayne County.  Emma will be furthering her education in the field of agriculture while recognizing the importance of natural gas development with regard to farming.

Two area students were awarded Certificates of Achievement on behalf of UDRBC and EnviroVentures by PA State Representative Jonathan Fritz at his Honesdale office on May 28th. 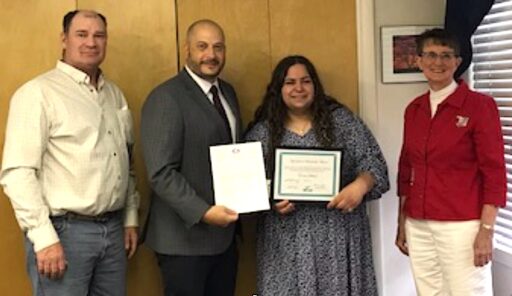 The mission statement of the UDRBC is:  Revering our heritage, we, the Upper Delaware River Basin Citizens, in an effort to provide current and future generations the ability to live and work in this region, are focused on maintaining individual property rights while promoting responsible stewardship and economic development of all resources in the Upper Delaware Basin. 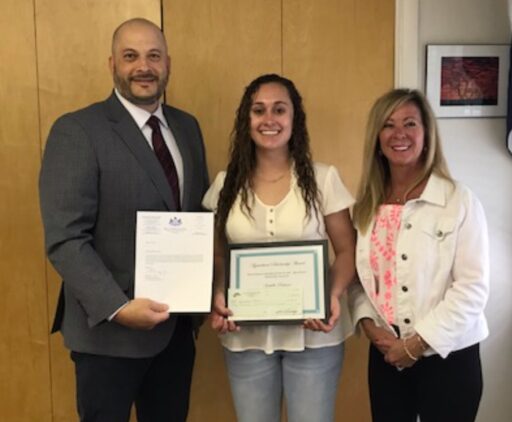 Pictured with Representative Fritz are Certificate of Achievement and EnviroVentures scholarship recipient Isabelle Richner and Maura Lunney-Dennis, who presented the scholarship award on behalf of EnviroVentures.

Each applicant was asked to write a 300-500 word essay on why Natural Gas Exploration and Development (NGED) is so important to agriculture and preserving family farming within the Upper Delaware River Basin.   The following is Emma’s response to that essay prompt:

In the past few years, the cost of many items essential to farming has risen.  The cost of fuel, animals, seed, and equipment has risen.  Farmers have had to down scale their operations or sell their farms completely to prevent bankruptcy.  Other farmers have had to give up on their ventures due to age.  This is seen clearly in Wayne County.  The number of small, family-owned farms has sharply decreased in the past few years.  The average age of a farmer in Wayne County, as of 2012, was almost 60 years old.  Natural Gas Exploration and Development (NGED) offers opportunities to sustain small, family-owned farms located in the Delaware River Basin.

By allowing NGED to take place on farmland located in the Upper Delaware River Basin, any subsequent monies realized would go directly to farmers that may be financially struggling and their families.  The income from allowing NGED could be the difference between having to sell the farm to afford retirement and being able to continue production and generational growth.  Many famers in our area take great pride to be known as multigenerational land-owning residents.  Additional income would also benefit farmers to pay for the increasing costs associated with farming.  Additional income through NGED would allow farmers to plant more crops or raise more animals to sell, which would in turn, generate financial local reinvestment.  This supplemental income would allow aging proud farmers to hire workers and help prevent the sale of farmland.

Agritourism offers an educational attraction, like opening a farm, orchard, or other agriculture-based venture to the public to encourage firsthand experience as to how agriculture works in real life.  Examples include pick-your-own pumpkins, apples, and Christmas trees; seeing where products like maple syrup and honey come from, and offering experiences to observe farm animals.  Further investment in agritourism in the Delaware River Basin is a natural match to the existing draw on a rich heritage and beauty the river and surrounding area offers.

Additional capital investments through income provided by NGED would allow farmers to pursue more sustainable farming ventures.  For example, farmers would be able to grow vegetables and produce hydroponically, without soil, year round.  Hydroponic farming allows for more high-quality food to be grown while reducing the need for tilling the soil and decreasing the amount of fertilizer and pesticide runoff going into the river.

Recognition of NGED will ensure that agricultural endeavors are sustained in the Upper Delaware River Basin for the farming community to continue to be prosperous for generations to come.

A second scholarship was given by EnviroVentures and presented by Maura Lunney-Dennis.  EnviroVentures is committed to a greener environment by taking what was yesterday’s waste and turning it into usable fertilizer, thus, assisting small farms throughout Wayne County to become economically viable farms, complementing the UDRBC scholarship.  The scholarship is given to an individual who is like-minded in this endeavor.   The $1000 scholarship was awarded to Forest City Regional High School senior Isabelle Richner, daughter of Steve and Colleen Richner of Pleasant Mount, PA, in recognition of her continued commitment toward the preservation of farming for future generations in Wayne County.   The following is Isabelle’s response to the same essay prompt:

Pennsylvania’s agricultural industry is very diverse all around.  As many know, Wayne County was highly populated with farms a few years ago, however, they have decreased by a large percentage because of low income and how expensive farming can be.  Natural Gas Exploration and Development has made farming a bit easier by lowering the cost of bills.  It will help to keep farmers farming for as long as possible.

Farmers able to lend their land for natural gas drilling are able to receive money and keep farming because of the extra income.  This will benefit them because they will not have to worry as much at the end of each month about having enough money to pay bills on time.  They could also use the money to pay off loans they had for equipment and other supplies used for farming.  Another way they could use the money is to better their farming techniques or farm in general.  This would preserve farming because people would have enough money to keep farming or start a new farm.

Although natural gas is not a renewable gas, it is more abundant than a fossil fuel such as gasoline and is more environmentally friendly.  Because a farm is eco-friendly, stores are more likely to buy from them.

We will always need the agricultural industry to keep us alive and well.  With small dairy farms shutting down, dairy consumers will not receive the pure products they expect to get when the only farms left are commercial.  Small farms pay closer attention to what they are producing and care about what they are putting out for people to consume.  Commercial farms are mainly concerned about the amount of money they are making.

Congratulations to both Emma and Isabelle!  May they have continued success in their pursuit of careers related to agriculture and the preservation of family farms in Wayne County.