New Jersey DEP under Phil Panderbear Murphy is a clone of Andrew Cuomo’s DEC and has just stolen the latter’s flea-flicker play in the NESE pipeline game. 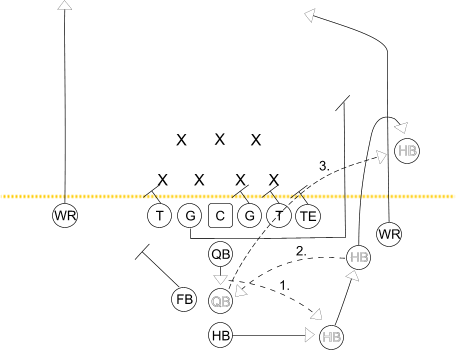 It’s maddening that a small group of vocal nuts can wield such power over our political process. Make no mistake, the rejection by the New York DEC and New Jersey DEP are for *political*–not scientific reasons. This small 23-mile pipeline along the bottom of the Raritan Bay poses no environmental threat whatsoever. Yet, it’s been rejected.

The good news, if there is any, is that both the New York DEC in May, and New Jersey DEP yesterday, rejected the application based on minor technicalities. Both rejections allow Williams, the builder, to resubmit the application. Williams already resubmitted the NY application. A spokesman stated the company will do the same for the New Jersey application.

In rejecting the Williams NESE application, the New Jersey DEP found “plenty it did not like about the proposal,” according to an AP article. This signals (to us) that after Williams resubmits the application, the New Jersey DEP will likely reject it anyway. We predict the same in New York. Both agencies will concoct flimflam excuses for why they are rejecting it, to cover for the fact it’s a political decision.

New Jersey regulators have denied key permits for a hotly contested pipeline project that would carry natural gas from Pennsylvania to New York, but they’re allowing an Oklahoma company to try again.

The state Department of Environmental Protection rejected permits Wednesday night, including ones for waterfront development and wetlands work.

But it also allowed Tulsa-based Williams Companies to adjust their plans for the nearly $1 billion Northeast Supply Enhancement project, and re-apply.

It marked the second time in a month that the proposal appeared to survive a rejection by state regulators in the region. Last month, New York regulators determined the project did not meet their standards, but like this one, their decision was made without prejudice, allowing Williams to reapply.

The company did not immediately respond to a request for comment Wednesday night.

Williams had planned to spend $926 million on the project, saying it is needed to ensure adequate heating and energy supplies to New York City and Long Island, and that it can be built safely with minimal environmental disruption.

Environmental groups and other opponents say the project would stir up tons of highly polluted sediment and reverse decades of hard-won environmental improvements in Raritan Bay, which has been struggling with pollution.

While not killing it once and for all, the New Jersey DEP found plenty it did not like about the proposal. It ruled that Williams had not proven there are no better alternatives to what was proposed.

“Alternatives that further avoid or minimize impacts to freshwater wetlands and riparian areas may be available and require further analysis,” the department said in a statement issued after 9 p.m.

It determined that the company has not demonstrated a compelling public need for a compressor station that would be used as part of the pipeline, nor did it prove an “extraordinary hardship” exists that would justify building the project as originally proposed.

“The proposed dredging could adversely impact surface water quality within New Jersey waters of the Raritan Bay,” the DEP said, adding that the company needs to demonstrate steps it would take to minimize disruption to the bay and ensure compliance with water quality standards.

Here’s a second article, which quotes Williams spokesman Chris Stockton as saying a revised application will be refiled in NJ posthaste:

The Murphy administration on Wednesday night denied three key permits for a controversial pipeline that would send natural gas from New Jersey under Raritan Bay to New York City.

A Williams spokesman said Thursday morning that the company will resubmit its application echoing what the company had said after the New York denial.

“We believe that we can be responsive to the issues raised by the agency and intend to resubmit the application to the agency in a timely manner to maintain the customer’s in-service date requirement,” said Chris Stockton, a Williams spokesman.

Along with the Raritan Bay portion of the pipeline, the DEP denied approval for a 6-mile pipeline in Sayreville and Old Bridge in Middlesex County and a key compressor station in Somerset County that make up the NESE project.

The project — an extension of the Transco pipeline — was seen as a key transporter of fracked Pennsylvania shale gas to New York and the Northeast.

“Transco has not fully demonstrated how it would avoid or minimize adverse impacts to surface water quality,” the DEP said in a statement released late Wednesday.

Similarly, the DEP said the company has not shown “alternatives that further avoid or minimize impacts to freshwater wetlands and riparian areas” for the 32,000-horsepower, gas-fired compressor station slated for Franklin in Somerset County.

The denial was met with applause from several New Jersey environmental groups many of which held rallies against the pipeline proposal. Opponents said the pipeline would harm the bay and the communities it would run through. They also said it would be a blow to Governor Phil Murphy’s clean energy goals.

“If we are serious about confronting climate change, these fossil fuel projects simply cannot be built.” said Junior Romero, an organizer with the advocacy group Food and Water Watch. “Governor Murphy should seize this moment to go further, by calling for an immediate moratorium on all new fossil fuel projects in the state.”

Business and labor groups have lobbied in favor of the pipeline, saying investment in job creation requires certainty about a sufficient energy supply.

The pipeline is opposed by Middlesex County and officials from several municipalities. It was approved by the Federal Energy Regulatory Commission on May 3.

The $926 million NESE project was designed to increase Transco pipeline capacity and flows heading into NYC and other northeastern markets. In particular, Williams wants to provide more Marcellus natural gas to utility giant National Grid beginning with the 2019-2020 heating season.

National Grid operates in New York City, Rhode Island and Massachusetts. Without this project, the NY metro area is in big economic trouble. Businesses, and the jobs they create, will go elsewhere. Apartment buildings and the revenue they bring, will go elsewhere.

There are a number of components to NESE, but the key component, the heart of the project, is a new 23-mile pipeline from the shore of New Jersey into (on the bottom of) the Raritan Bay–running parallel to the existing Transco pipeline–before connecting to the Transco offshore. Most of the pipeline is under water.

If New York DEC and/or New Jersey DEP ultimately rejects the permit and blocks the project, it will be the equivalent of an economic atom bomb being dropped on New York City. Both National Grid and Consolidated Edison, the two utility companies that supply natural gas to all of NYC and Long Island, have slapped an ongoing moratorium on adding new natgas customers.

That means projects like the new $1 billion stadium complex for the New York Islanders in Queens is now on hold. As are dozens (hundreds?) of major projects, including shopping malls and apartment buildings. Stopping NESE will be an economic disaster for NYC and its suburbs. And NJ shouldn’t think they’ll somehow benefit from NYC’s loss. If NYC catches a cold, NJ will get the flu, economically speaking.

Editor’s Note: I’m more hopeful than Jim on this one. The metro area needs the NESE pipeline project badly, and the environmental review plus the complete lack of substance from those opposing it on those grounds, so I think Cuomo has no choice but to approve it, followed by Murphy again. I see their moves as “flea flicker” plays in a stupid game intended to pander to the green true believers and, especially, their gentry class enablers. The “flea flicker” is described as follows:

A flea flicker is an unorthodox play, often called a “trick play,” in American football which is designed to fool the defensive team into thinking that a play is a run instead of a pass.

So, what do you readers think? Is Jim correct that New Jersey DEP and New York DEC will deny the applications again? Or, is a flea flicker play intended to deceive the Green True Believers? Of course, it could also be a play against us, couldn’t it? That;’s the problem with folks such as Cuomo and Murphy; you never know what disgusting game they’re playing.