The German Energy system is in free-fall disaster shape and the folks who brought about the Energiewende now what to double-down on green foolishness.

Germany’s Energiewende, or German energy transition to renewables, is leading to an insecure supply of energy and is affecting the nation’s economy. Germany plans on phasing out all its nuclear plants by 2022 and its coal plants by 2038 in favor of renewable energy, primarily intermittent wind and solar power, which is causing electricity prices to spike and its electric grid to falter. 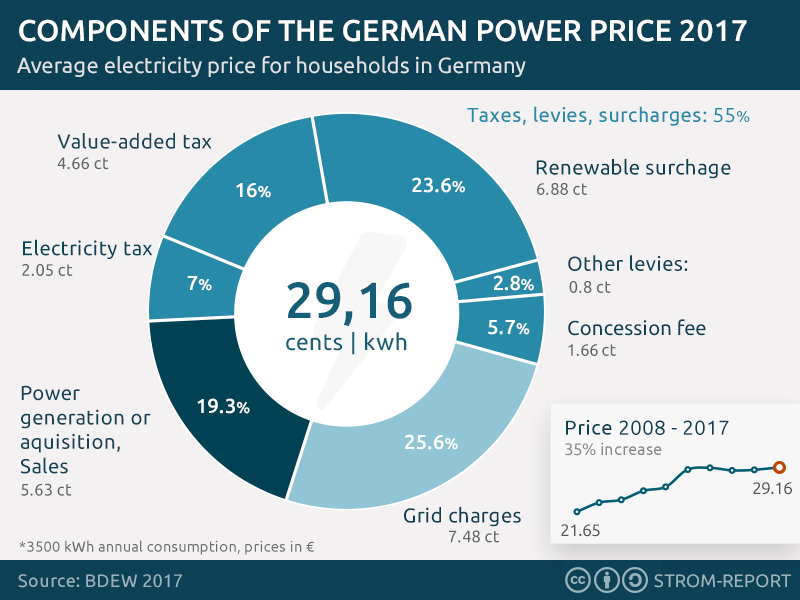 More than 55% of the average electricity price in Germany in 2017 was attributable to renewable subsidies and taxes. Only Denmark has higher prices in Europe. German electricity prices are a little less than triple those in the United States.

If Germany continues to phase out both coal and nuclear, it will lose the equivalent of 43 percent of 2018 secured output. German electricity prices are already 45 percent above the European average (and 3 times U.S. average residential prices) with green taxes now accounting for 54 percent of household electricity prices. Radical changes are required to remedy the electricity system, including building transmission lines eight times faster than they are currently being built, building new back-up power plants, and installing instruments to control electricity demand, all of which would drive electricity prices even higher.

Despite these problems, Germany has a new plan to reach its climate commitments, which are falling behind. Germany’s 100 billion Euros climate plan entails higher fuel prices for consumers, seven to 10 million electric cars by 2030, a network of one million charging stations, an air traffic tax, cheaper train tickets, and more solar panels and wind turbines.

In 2018, Germany emitted 866 million metric tons of carbon dioxide, 15 percent higher than its goal of 750 million metric tons by 2020. If emissions reductions continue at the same pace as they did over the past ten years, Germany’s carbon dioxide emission targets for 2020 would be reached eight years later, and 2030 targets would be reached in 2046. Germany is just 39 percent toward meeting its goal for primary energy reduction.

For three days in June 2019, the electricity grid came close to black-outs. Short-term imports from neighboring countries were used to stabilize the grid. That month, Germany imported more electricity than it exported, and it is expected to become a net electricity importer by 2023. As a result of Germany’s energy supply shortage, the highest observed cost of short-term “balancing energy” skyrocketed from €64 in 2017 to €37,856 in 2019. It is clear that security of supply will continue to worsen in the future with the country’s increased dependence on intermittent power and the ongoing phase-out of nuclear power and the planned coal withdrawal.

The growing insecurity of the German energy supply is made worse by the fact that its neighbors, Belgium and the Netherlands, may shut down their secure capacity—coal plants in the Netherlands and nuclear plants in Belgium, thereby making it difficult for Germany to meet demand with imports. In fact, in the middle of the next decade, there may not be enough supply capacity in the entire European network and conditions could continue to worsen until 2030.

Local communities and environmentalists in Germany have blocked the building of transmission lines from the north, where the wind farms are located, to the industrial south. By the first quarter of 2019, only 1,087 kilometers of the planned 3,600 kilometers of power lines were completed. At that rate, the 2020 target will not be reached until 2037.

Germany’s new climate plan aims to reduce Germany’s greenhouse gas emissions by at least 55 percent from 1990 levels by 2030. The plan includes the following:

Germany plans to increase wind and solar power. To increase local acceptance of new wind farms, which are frequently held up by court challenges, municipalities will be allowed greater participation in their profits, which of course will come from higher consumer prices. That way, local and federal governments will be able to share in higher costs that will be paid by consumers.

The plan expects to have seven million to ten million zero-emission electric cars on the roads by 2030, supplied by a network of one million charging stations. To encourage purchases of electric vehicles, a subsidy of several thousand euros, co-financed by the government and manufacturers, will be awarded for models below 40,000 Euros beginning in 2021. The motor vehicle tax will also be adjusted to reward green mobility and discourage vehicles that emit carbon dioxide.

The plan will attempt to replace short-distance air travel with train travel. The air traffic tax will increase beginning January 2020, and airlines will be barred from selling bargain tickets. To encourage train travel, the price of train tickets will decrease by about 10 percent due to a reduction in the value-added tax applied to them. The government will spend around €86 billion on railway infrastructure, and one-euro-a-day urban public transport passes will be used on pilot projects to encourage ridership.

Germany will pay up to 40 percent of the cost to subsidize replacing oil-fired home heating systems with lower-emissions options. In most cases, installing new oil heating systems will be prohibited beginning in 2026. Tax incentives will be used to encourage energy-saving building renovations, especially to reduce heat loss in the cold winter months.

A national emissions trading scheme for the transport and buildings sectors will be implemented, complementing an existing European system for energy and industry, which will increase the cost of petroleum and diesel. Long-distance commuters will be compensated with tax breaks to lighten their cost.

The scheme will encourage businesses and consumers to use non-carbon dioxide emitting technology in order to avoid the direct or indirect cost of “right-to-pollute” certificates. A metric ton of carbon dioxide emissions will initially be priced at €10 beginning in 2021, increasing to 35 Euros by 2025. After that, the emission rights will be auctioned at prices between 35 and 60 Euros. The auction will set the price according to demand and supply of emission permits. A maximum emission quantity will be determined and then decreased year by year.

The German energy system is in disaster, due to the phasing out of secure nuclear power and coal plants, and increasingly relying on intermittent wind and solar power. The country’s new climate plan will only exacerbate the problem and increase prices, which will eventually affect its economy. Germany’s “Green Dream” is turning out to be a nightmare for consumers, but a bonanza for politically-connected industries and large and growingly intrusive government.