Free speech on climate issues and a lot of other issues is increasingly threatened by our new media, which has a totalitarian impulse to control everything.

Today’s Green New Dealers and their allies have mapped out their own totalitarian strategies. 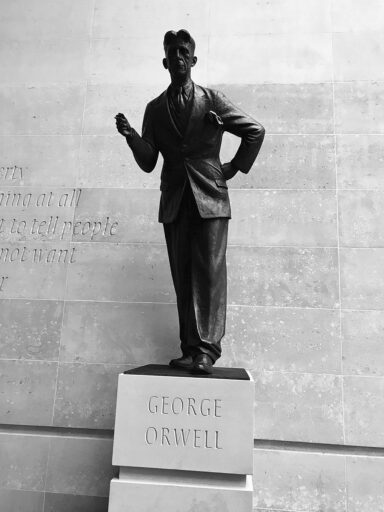 George Orwell: “If liberty means anything at all, it means the right to tell people what they do not want to hear,”, from hid proposed preface to Animal Farm (1945).

They proclaim themselves socialists, but their economic policies and tolerance for other viewpoints reflect a different form of government – fascism: A political system in which authoritarian government does not own businesses and industries, but strictly regulates and controls their actions, output and rights – while constraining and suppressing citizens and their thought, speech and access to information.

Alexandria Ocasio-Cortez (D-NY) has “no problem” with the fact that implementing her Green New Deal would require “massive government intervention,” wealth redistribution on an unprecedented scale, and many trillions of dollars in new debt. GNDealers want to totally eliminate fossil fuel production and use, and control how much we can drive and fly, heat and cool our homes, eat meat, and live our lives.

China controls all those rare earth metals and most of the lithium, cadmium and cobalt needed for all that pseudo-renewable, pretend-sustainable energy. They are produced in China and Africa, often with child labor and near-slave labor, and with virtually no health, safety or environmental safeguards.

Meanwhile, Asian, African and EU nations are building or planning over 2,000 coal and gas-fired power plants. So even US elimination of fossil fuels would do absolutely nothing to reduce global CO2 levels. Moreover, citizens are likely to rise up in loud opposition to having millions of wind turbines, solar panels, batteries and biofuel plantations in their backyards and across scenic vistas and wildlife habitats.

GNDealers don’t want to talk about any of those ethical, social justice or environmental issues – or about the GIGO computer models and bald assertions of Climate Armageddon that have no basis in real-world evidence. They don’t want anyone else talking about it, either. They want to control what we say and think, even what ideas and information we can find online and in print, television, radio and social media.

They loath and fear ideas, facts and questions that challenge their views and political power. Free speech and access to other people’s free speech is a clear and present danger to their perceived and asserted wisdom on fossil fuels, capitalism, manmade climate chaos, Western culture, and who should make policy decisions on energy, economics, jobs, living standards, religion, civil rights and other matters.

Their version of “free speech” thus includes – and demands – that their critics have no free speech. On college campuses, in “mainstream” and social media, on search engines, in online information libraries, even in the arts, bakeries and K-12 education, thought control and electronic book burning are essential. Despite having a 12 to 1 ratio of liberal to conservative professors, leftist college faculty, administrators and students still ban, disinvite, disrupt and physically attack conservative speakers and their hosts.

They harass Trump administration officials in restaurants – and “dox” political opponents, revealing their names and home addresses, so that other radicals can harass, intimidate and attack them … thereby “persuading” others to stay silent. They assaulted North Korean escapees for wearing MAGA hats.

Google helps the Chinese government deny its citizens access to “dangerous ideas” – and says nothing when China sends a million Uighur Muslims to “reeducation camps.” Its hard-left employees ostracize any conservatives they still find in their ranks … and claim helping the US Defense Department with Cloud computing or artificial intelligence surveillance would “violate their principles.”

Facebook “shadow banned” an ad promoting a Heartland Institute video that called on millennials to reject socialism and embrace capitalism. Facebook censors told Heartland they “don’t support ads for your business model” (capitalism) and would not reveal “red flags” and trade-secret algorithms they use to “identify violations” of their policies and “help preserve the integrity of our internal processes.” Google suppressed Claremont Institute ads for a talk on multiculturalism and political speech restrictions.

Wikipedia posts distorted or false bios for climate realist experts and organizations – labeling me an anti-environment lobbyist – and then pops up ads soliciting money for its biased “educational” material. Securing corrections is a long, often fruitless process. Even more totalitarian, the Southern Poverty Law Center uses phony “hate speech” claims to defund and “deplatform” conservative groups like David Horowitz’s Freedom Center, by pressuring credit card companies to close off donations to them.

State attorneys general and members of Congress want to prosecute and jail people for “denying the reality” of “manmade climate cataclysms.” Worst of all, the callous organizations and policies that Big Tech supports cause millions of deaths every year, by denying impoverished nations and families access to the modern energy, insect control and agricultural technologies that its vocal, racist elements loathe.

Creating conservative competitors or finding ways around these social media and fake info behemoths is vital, but would be stymied by their sheer size, wealth and dominance. Trust busting by the FTC, other federal agencies, Congress and the courts, á la Standard Oil Company, should certainly be considered.

These cyber-giant social media and information platforms may be private companies, but they wield massive power, especially with younger generations that get almost all their information online. They are entirely dependent on the internet – which was created by US government agencies and taxpayers. (“You didn’t build that,” President Obama might tell Google.) They have become essential, dominant public forums for discussing and evaluating public policies that increasingly affect our lives.

A federal judge has ruled that President Trump may not block hate-filled criticism from his Twitter account. Because it is a public forum, akin to a park or town square, for discussing important policy and personnel matters, it is protected by the First Amendment. Blocking unwanted tweets is therefore viewpoint discrimination, and Twitter is not beyond the reach of First Amendment public forum rules, she held. Her reasoning should not apply only to the President and his most obnoxious critics.

The right of free speech and free assembly – to participate fully in debates over important political and public policy matters – is the foundation for the other rights and freedoms that enable our vibrant nation to function. Banning, censoring and deliberately falsifying certain viewpoints deprive major segments of our population and electorate of the right to speak, be heard, become informed, examine all sides of an issue, and live in harmony, peace and prosperity.

Viewpoint censorship, bullying and silencing violates the basic rights of speakers, students, professors, voters and all people whose views an elite, intolerant, power-hungry few have deemed “inappropriate” or “hurtful” to the sensitivities of climate alarmist, pro-abortion, atheist and other liberal factions.

Editor’s Note: Free speech is everything and the increasing media, and especially social media, culpability in shutting it down in hopes to advance a political agenda is disturbing in the extreme. We see it everywhere and I experienced myself with Facebook on which I used to advertise these posts until they started classifying everything “political” and restricting it. That’s why I refuse any longer to pay Facebook a dime for anything, although we do post links there. Interestingly, it hasn’t hurt our readership in the least, although we did simultaneously start adding other media to our promotional efforts. There are many alternatives and they work. Search them out and starve big tech! Refuse to let them control what you can say.

Paul Driessen is senior policy analyst for the Committee For A Constructive Tomorrow (www.CFACT.org) and author of Eco-Imperialism: Green power – Black death.