DRBC Lawsuit by Senators Goes to Third Circuit with Appeal

The dismissal of the DRBC lawsuit against that rogue politicized agency by Senators Baker and Yaw and others has been appealed to the Third Circuit for justice.

Pennsylvania State Senators Lisa Baker, Gene Yaw, the rest of the Pennsylvania Senate Republican Caucus, together with Damascus Township, Dyberry Township, and Wayne County, have appealed Judge Paul Diamond’s dismissal of their DRBC lawsuit. That lawsuit challenged the takings aspects of the DRBC’s outrageous single-industry ban on natural gas development and, thereby, the sandy legal foundation of the ban itself. Diamond, a RINO Republican was legal counsel and Treasurer of the duplicitous Arlen Specter’s ridiculous Presidential campaign before getting a judicial appointment as a reward. His dismissal of this DRBC lawsuit reeks of elitist contempt for the interests of Pennsylvanians north of Bucks County and deserved to be appealed. 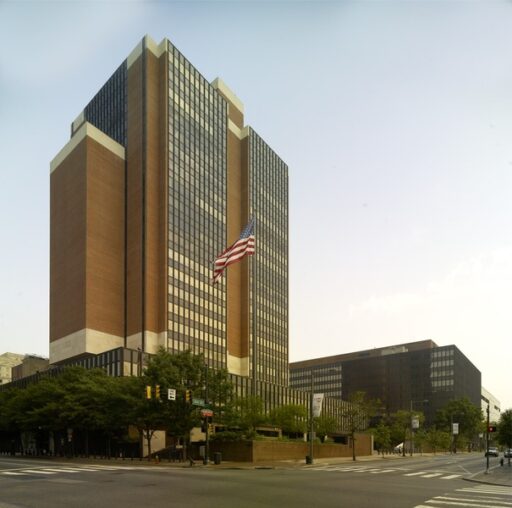 The Philadelphia “ivory tower” where Judge Paul S. Diamond, a former Arlen Specter staffer, rules from and has told Pennsylvania Senators they have no standing as the elected representatives of the people when the latter’s property rights are stolen without compensation by a rogue agency and a governor more aligned with New York and New Jersey than his own Pennsylvanians.

Diamond rejected the DRBC lawsuit brought by the Senators on the theory they had no standing as the elected representatives of those Pennsylvanians who own land; Pennsylvanians who have seen their property in mineral rights not merely taken from them but completely stolen without compensation solely for the purpose of satisfying the wholly unscientific ideological claims of special interests from other states who have co-opted the agency.

If the elected representatives of the people of the states who comprise the DRBC don’t have standing, who the hell does? The unelected, completely private special interest known as the Delaware Riverkeeper regularly gets to intervene in Federal lawsuits over land it doesn’t own, but our elected State Senators don’t? What could possibly be more wrong with our justice system than the exclusion of the people’s representatives while every conceivable elitist special interest is accommodated? Judge Diamond constructed a rationalization, as only our wannabe legislatively inspired judiciary can get away with, to justify siding with his fellow members of the Philadelphia gentry class.

Diamond, in fact, said the DRBC fracking ban was just a political matter, subtly acknowledging what he himself was doing, while obfuscating the fact he was excluding the politicians from acting to remedy the sellout of Pennsylvania landowners by their trust-funder Governor Tom Wolf. Wolf didn’t consult them, after all. He, as is typical of the man, chose to act alone. As a spoiled child of wealth, he’s never had to engage others, after all, so he didn’t bother this time either. Instead, he chose to follow Andrew Cuomo, just he did in pushing COVID patients into nursing homes with disastrous results. That’s what yielded the DRBC ban, leaving the Senators no option but to sue, only to be told by Diamond they have no standing! The very thought that this is what passes for justice in this country is revolting.

How will the Senators do? One never knows with courts that are ever more political, but we do know this is not the first rodeo for the Senators. They were also excluded from the WLMG lawsuit agains by Judge Mariani, who inexplicably let the Delaware Riverkeeper into that one, proving my point as to how justice has been turned on its head in this country if the elected have no say and the self-appointed every say. But, the Third Circuit Court of Appeals, the same one who overturned Mariani’s dismissal of the WLMG lawsuit and will act on this appeal also rejected his denial of the Senator’s standing in that case. Here’s the background from the decision last year kicking the Senators’ case back to Mariani:

On remand, the Senators again sought to intervene. This time, they presented a unique proposed complaint, articulating two grounds for relief. In Count I, they requested that the District Court “invalidate the de facto moratorium and enjoin its further enforcement,” arguing that it “violates the terms of the Compact because it exceeds the scope of authority ceded to the [DRBC] under the Compact.”

Alternatively, in Count II, the Senators requested an order that the DRBC “provide just compensation for the deprivation of the economic value of the property in question.” According to the Senators, even if the Determinations are a valid exercise of the DRBC’s authority, they nevertheless constitute “a regulatory taking without just compensation” under the Fifth Amendment.

The DRBC and the Riverkeeper again opposed the Senators’ attempt to intervene. This time, however, neither party contended that the Senators lack standing, resting their arguments chiefly on the merits of the Senators’ motion. The District Court agreed, denying the motion because the Senators had not shown a “significantly protectable interest in th[e] litigation.”

That last part (emphasis added) is what the Third Circuit rejected. It did not explicitly say the Senators had standing and the decision had to do with a request to intervene, rather than standing per se, the point is that the Third Circuit didn’t buy Mariani’s casual dismissal of their interests. Perhaps it recognized the cognitive dissonance of allowing in the self-appointed PovertyKeeper and excluding the people’s elected representatives. Who knows? Nonetheless, this appeal is very worthwhile. Indeed, if it isn’t worthwhile then we might as well pull up the carpet because America’s walk down the path of civil society where justice and liberty flourish is over.

Please call Senators Lisa Baker and Gene Yaw and thank them for their efforts to defend those principles: