Big Green, Inc. – The Sources of the Money Behind Fractivism

Fractivism is anything but grassroots. Rather, it is funded and orchestrated Big Green, Inc. and the Institute for Energy Research is documenting it all.

Last year, as readers might recall, IER launched Big Green, Inc. to began exposing the under-the-radar funders that underwrite the anti-American energy movement and its anti-fracking ballot measures, pipeline hold-ups, and “Keep It In the Ground” anti-fossil fuel advocacy that touches all fifty states.

IER is now releasing a major update that exposes new connections and tells a compelling story of money and influence working against our shared goal of a pro-American energy future. 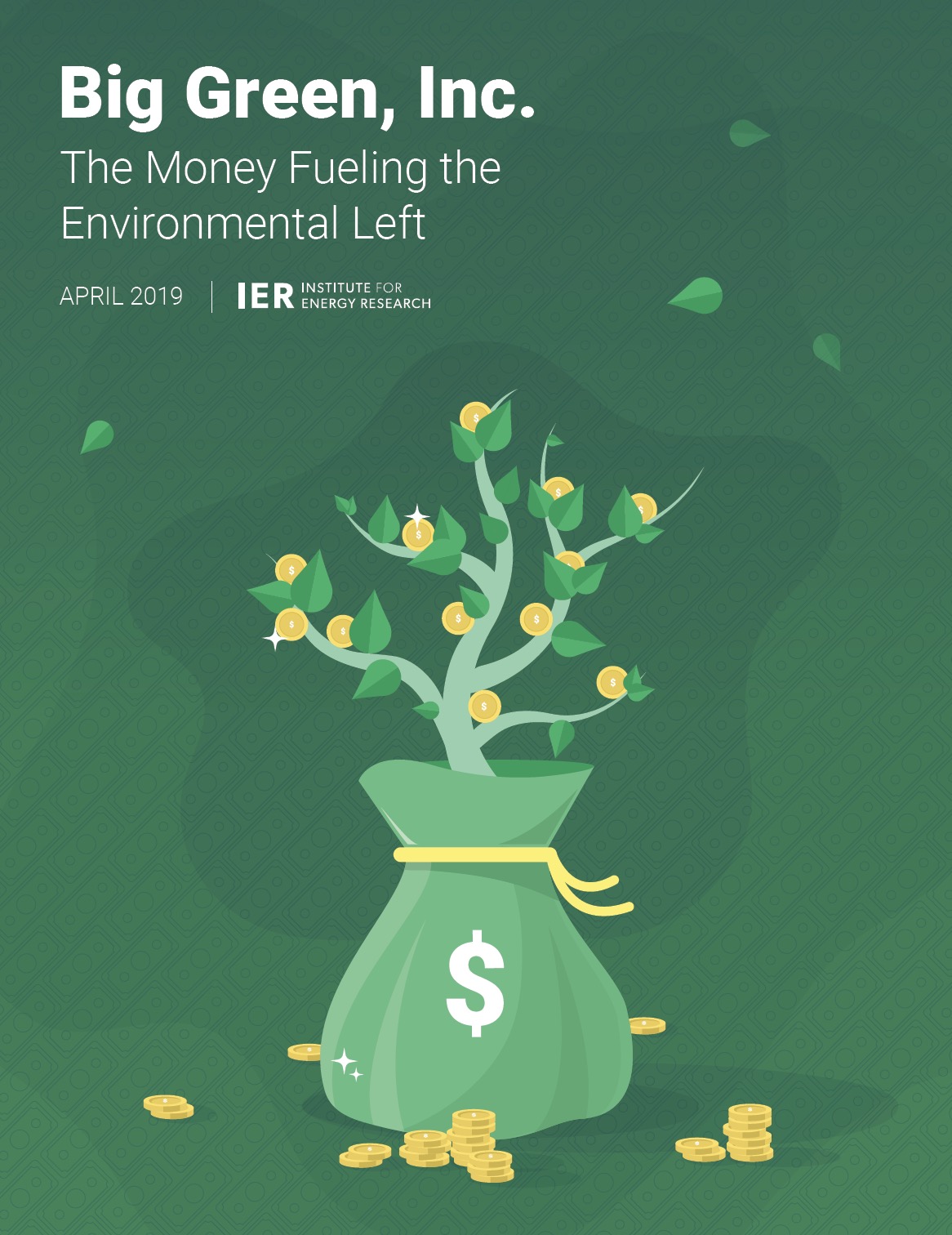 First, IER has added four new funders to Big Green, Inc. bringing the total to 14. This group of funders, over a nine-year period, has funneled over $4.2 billion to over 1,900 groups in all 50 states to advance their “green” agenda.

This includes nearly $120 million to 126 different groups in Pennsylvania.

Second, this update is accompanied by a new report — Big Green, Inc. The Money Fueling the Environmental Left — that unveils the size, scope, motivations, tactics, and end goals of this dangerous movement.

It is an extensive exposé that tells the story of the data in Big Green, Inc.

You can see this powerful report and data below:

Editor’s Note: As a teaser, let me share these excerpts from the Big Green report:

There are three important takeaways from the information presented in Big Green, Inc. First, environmental groups have crafted a narrative that depicts their efforts as a “David vs. Goliath” battle against those who would like to see U.S. energy policy move in a free market direction. This narrative is false. Environmental groups outpace conservative and free market groups both in terms of funding and organizational capacity.

Second, Big Green, Inc. demonstrates the sweeping influence of environmental activism and provides insight into how groups target the gatekeeping institutions of our society. As the database illuminates, environmental funding has been directed toward policymakers, journalists, academic institutions, the offices of elected officials, government organizations like the Federal Emergency Management Agency, as well as international institutions such as the World Bank.

Finally, Big Green, Inc. demonstrates how this complicated system of financial transfers muddles efforts to reveal the sources of this funding, which has been linked to individuals who stand to benefit financially from the adoption of various environmental policies as well as foreign actors trying to influence energy policy within the U.S.

…To get a sampling of this, Big Green, Inc. encapsulates grants made by 14 key foundations between the years 2008 and 2016. The vast majority of the grants by these organizations during this time were directed toward organizations promoting climate change activism. According to the database, $1.7 billion dollars was spent on climate research and advocacy. These grants were generally directed toward public policy organizations like the Center for American Progress, which received over $9 million to “mitigate climate change.”

The general operations of various organizations accounted for $1.2 billion worth of grants. These grants were usually left open-ended, allowing the recipient organizations to spend the money on whatever they deem appropriate. For example, the Natural Resources Defense Council received just over $8 million worth of grants from a variety of foundations to fund their general operations…

In addition to funding organizations and projects that promote climate change research and environmental policy, another large portion of this funding goes to organizations that target energy development in the U.S. These programs, which are collectively known as “Keep it in the Ground” within the environmental movement, are perhaps the single greatest threat to energy development in the U.S.

According to the database, $77.8 million went from left-wing organizations to initiatives specifically preventing oil and gas development in the U.S. Most of these grants sought to limit oil and gas production on public lands, while others targeted specific energy development projects. For example, the John D. And Catherine T. MacArthur Foundation gave the Environmental Defense Fund $2 million in 2016 to “reduce harmful climate and environmental impacts of natural gas production.” Additionally, the database reveals $25.3 million worth of grants that were specifically directed to anti-fracking initiatives across the country…

According to the database, $90.4 million worth of grants were made to a variety of organizations for public engagement. These grants include funding projects such as documentaries, conferences designed to engage business leaders,23 programs that are designed to build support amongst religious communities,24 and environmental reporting at various news organizations.

In addition to public engagement, it’s also evident that another goal of these foundations is to use their money to promote environmentalism in higher education. The 14 grantmaking foundations gave $90.5 million directly to colleges and universities in support of a wide-range of programs.

The best example of this is Yale University, which has received over $31.3 million dollars from these foundations for various climate programs. Another smaller example of this type of grant is a $295,000 grant from the Schmidt Family Foundation to the University of California, Berkeley to support the school’s Graduate School of Journalism.

Another shocking revelation is the fact that the grantmaking foundations are providing funding for government offices and agencies. In 2008 and 2009, the Energy Foundation made two grants for $200,000 and $50,000 respectively. The purposes were to “support development of climate and clean energy policy in Colorado” and to “support the Governor’s office climate and clean energy fellow position.” It’s hard to imagine how these grants could be interpreted as anything other than renewable energy interests paying for access to the Office of the Governor of Colorado.

Looking beyond those specific grants, the database offers insight into the effort of special interests to target governors more broadly. The database includes several millions of dollars worth of grants made to organizations like the Governors Wind Energy Coalition, Governors Ethanol Coalition, and the National Governors Association Center for Best Practices.

There is a whole lot more, including new insights into the extensive foreign influence involved. Check it out!