[Editor’s Note: Biden wants to “preserve 30% of our land” with a Federal land grab while covering America with land gobbling, inefficient and intermittent green energy “farms.”]

Via yet another decree (Executive Order 14008), President Biden has instructed government agencies to “permanently protect” at least 30% of all U.S. lands and waters by 2030. This “30 X 30 Plan” appears to presume that any areas not designated as park, refuge or wilderness are not “protected,” even though the vast majority of federal lands are already effectively off limits to mining, drilling, timber harvesting and even grazing, by virtue of policies heavily tilted toward preservation and against any development. 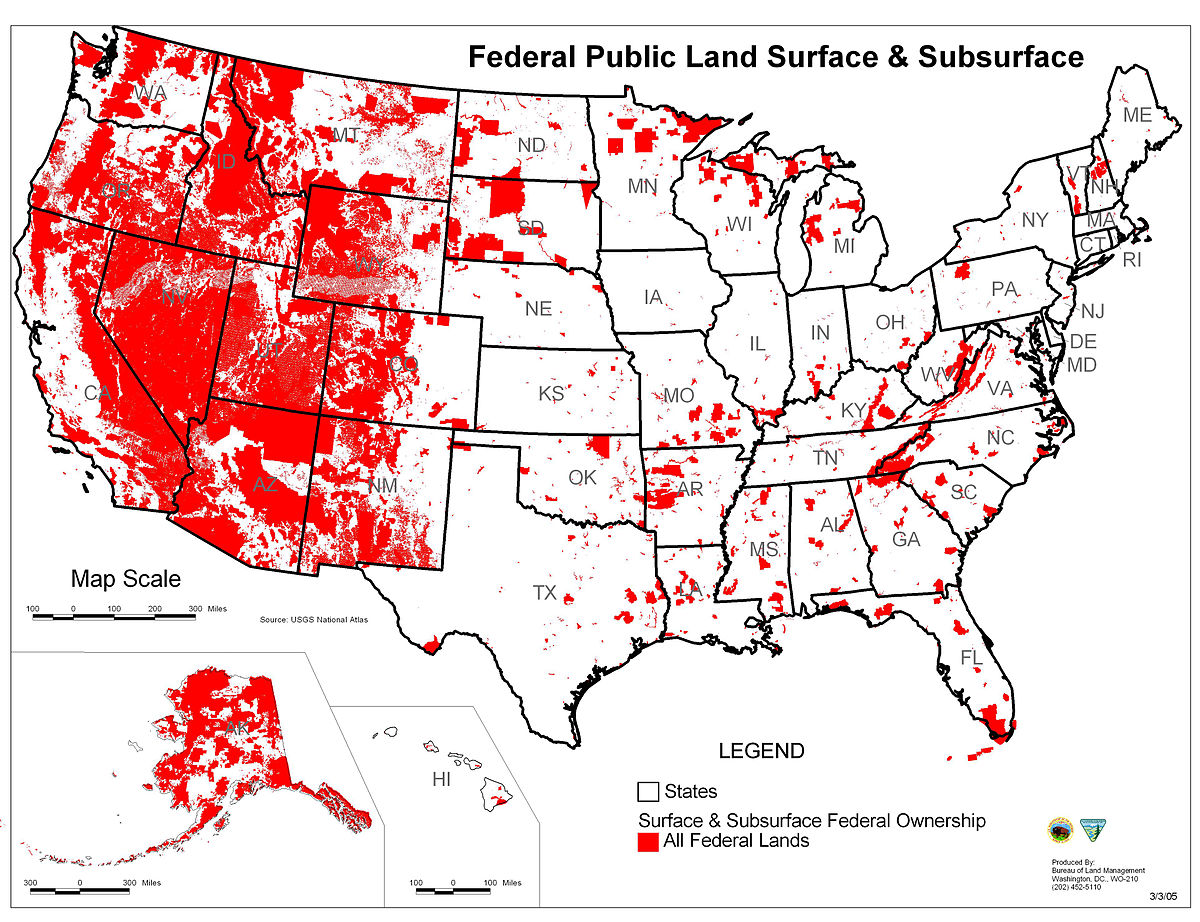 And, now Biden wants even more!

NPS lands are managed solely for scenic, wildlife protection and recreational purposes. Some FWS lands allow limited farming and energy development. BLM and FS areas are supposedly “multiple use,” with some natural resource development allowed on these federal lands, but all are increasingly managed primarily for preservation. Of this total – 109 million acres – Washington plus Oregon – are already designated “wilderness,” where little more than hiking is permitted. Team Biden thinks even more should be off limits.

There is presumably no plan to buy up millions of acres of state and private land in states where the federal government now owns almost no land: such as 0.3% federal in Connecticut or 2.4% in Delaware. Instead, it’s likely the order envisions even more restrictive federal control in Alaska and 11 states west of the Dakotas, where the feds own from 29% of all land in Montana to 81% in Nevada – but effectively control even more acreage, because federal lands surround or affect access to state and private holdings.

Fresh and ocean waters of the United States would likely come under similar new restrictions – managed to protect rare, threatened and endangered species, or with wildlife used to justify restricting or banning drilling, fracking, mining, farming and other “undesirable” activities, in or near those species and waters.

Anti-development actions obviously harm local and state economies. But matters get truly interesting when we examine Team Biden plans to eradicate the 80% of US energy that now comes from fossil fuels, and replace it with pseudo-renewable wind, solar and battery power. And we don’t even have to ponder the already shaky energy systems and economies, the frequent and prolonged blackouts, the scramble to find adequate electricity in states that are increasingly and inadvisably reliant on wind and solar power.

Even more eye-popping, President Biden wants 80% hydrocarbon-free electricity generation by 2030, 100% by 2035, and zero fossil fuels anywhere in the US economy by 2050.

But replacing America’s fossil fuel energy with wind and solar electricity would require tens of thousands of offshore wind turbines, millions of somewhat smaller onshore turbines, and/or billions of solar panels – many from China – plus thousands of miles of new transmission lines, plus over a billion half-ton backup battery modules for just one week of windless, sunless days. It could also mean turning entire US forests into wood pellets, to be burned in place of coal and gas to generate “zero-carbon” electricity in Britain and elsewhere – and growing corn, soybean, canola and other biofuel crops on millions of US acres that are now food crop, fallow, scenic and wildlife habitat lands. (See here, here and here for details.)

How does this square with plans to have federal overseers “protect” 30% of the nation’s lands and waters – while safeguarding bald and golden eagles, falcons, white-nosed bats, lesser prairie chickens, snail darters and hundreds of other rare, threatened and endangered species? How will federal lands managers and courts ensure that critical land, water, wildlife and scenic issues are fully vetted, before they grant permits for massive “clean, green, renewable” energy installations – under the same years-long review process they demand for drilling, fracking, mining and pipelines?

Obviously, it doesn’t. And they won’t. It’s just another eco con job.

They’ll have to ignore laws, cut corners and fast-track installation projects. They’ll destroy America’s habitats, wildlife and scenic vistas, in order to save them … from “catastrophic manmade climate change.”

Liberal Green/Blue cities and states won’t want bird-and-bat-chopping wind turbines, or habitat-blanketing solar panels in their backyards or off their shores. They certainly won’t want battery factories and mega-warehouses anywhere near them – especially considering the fire and explosion hazards they could pose. They’ll want these facilities installed in western states and other parts of “flyover country.” And they may have the votes, Big Media, Big Tech and Big Government power to dictate these terms.

That means communities will have to be vigilant – and prepared to file lawsuits and take other actions to ensure that project, programmatic and cumulative environmental impact studies are conducted; that other human health issues (such as light flicker and infrasound from wind turbines) are addressed in detail; that massive installations are blocked before they wreak havoc; that our living standards are safeguarded.

There are other threats. Europe is already pondering “carbon tariffs” that would slap climate taxes on products imported from countries that don’t honor their Paris climate treaty obligations and continue to burn coal, oil and natural gas. Will that include wind turbines, solar panels, electric vehicle and backup battery modules from China? Will Mr. Biden, Congress and/or Blue State legislators do likewise?

And, don’t forget the trash, much of it laced with toxic materials. Solar panels, EV and backup batteries, and 115, 290 or even 350-foot wind turbine blades can’t be recycled. In whose backyards do they plan to put the monster landfills and dump the billions of tons of non-renewable trash? At whose expense?

It’s incredible how far the climate obsessed have gotten by blaming every climate and weather blip on fossil fuel use – and insisting that natural climate changes that have blessed or pummeled planet and people throughout history have suddenly been replaced by purely manmade climate chaos.

It’s equally incomprehensible that Team Biden can claim the US and EU can “save the planet” by eradicating fossil fuels – while China, India and a hundred other countries vastly expand their fossil fuel use to: (a) meet their own economic development goals; and (b) conduct the mining, processing and manufacturing needed to support our governing classes’ utopian wind, solar and battery ambitions.

While the United States significantly reduced its emissions of plant-fertilizing carbon dioxide (the “miracle molecule” that makes life on Earth possible) by replacing coal-fired power with natural gas, Asian and other countries opened hundreds of new coal-fired power plants. China alone put 38.4 gigawatts (38,400 megawatts) of coal plants into operation in 2020; its annual GHG emissions already exceed those of all developed countries combined. Beijing is also building, planning or financing more than 300 coal plants in Turkey, Vietnam, Indonesia, Egypt and other nations.

African countries are planning to build more than 1,250 new coal and gas-fired generating units by 2030, many financed by Chinese banks and built by Chinese companies. Coal still supplies more than 70% of annual electricity consumption in India, the world’s second-largest coal user. India and Russia plan to mine much more coal and build hundreds more new coal-fired generating units in the next few years. Oil and gas production and consumption are also climbing rapidly once again in those countries.

Any American “energy transformation” would simply transfer emissions from the United States to these other countries. Worldwide fossil fuel use and CO2/greenhouse gas emissions would actually increase significantly. Even assuming those emissions are now the primary factor controlling Earth’s climate, there would be no climate benefits even from completely eliminating fossil fuel use in the United States – and attempting to replace that energy with wind, solar, battery and biofuel power – at enormous economic, environmental, social and human cost.

Yet, this is the insane, authoritarian world we now live in. It’s time to end the “woke” cancel culture, debate these issues in every public forum, and restore common sense, before the costs soar any higher.