Trolley Trail Opens with Help of the Natural Gas Industry

[Editor’s Note: Cabot Oil & Gas and its suppliers helped open a new section of the Trolley Trail in Lackawanna and Wyoming Counties recently.]

Though the ceremony had to be put off for a year, it was still exciting to gather in LaPlume on Monday to mark the grand opening of Phase 3 of the Trolley Trail with the Countryside Conservancy. The ribbon cutting ceremony on April 19 drew a number of people. All had helped with the construction of the new stretch and also worked behind the scenes. 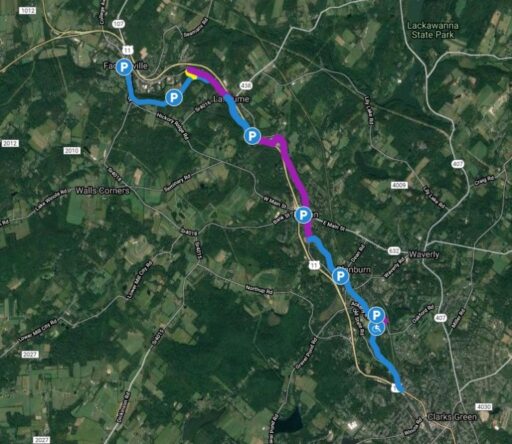 The updated map shows the portions of the Trolley Trail in blue that are accessible for hiking and biking. Purple sections have yet to be completed, and the yellow trail is a connector from Keystone College.

Technically, this has been three years in the making. We had to cancel the grand opening last year due to COVID. It quietly opened last spring, but outdoor enthusiasts and their families found their way to the trail. “We were busier than ever,” Conservancy Director, Bill Kern, told those in attendance. “We saw a 150 to 200 percent increase in use of the trail system in 2020.”

Phase 3 is a two-third mile stretch between Cherry and West LaPlume streets, a pleasant to-and-from walk from either direction. Phase 1 opened in 2014 and Phase 2 in 2017. I’ve walked sections of the trail, which is relatively flat and has nature surrounding each bit.

It was a proud moment for Cabot and our partner companies as the primary sponsors of this new link. This included Sugar Hollow, Tioga Environmental and Williams. Bill was kind enough to acknowledge our support, as well as that from officials in neighboring communities Dalton, LaPlume and Factoryville. Commissioners from Wyoming and Lackawanna counties who also played key roles in bringing the project to fruition also attended.

“Trails like this that turn old industrial waste areas into useful and beautiful space like this are wonderful for our counties,” Commissioner Tom Henry of Wyoming County remarked. “It’s very exciting that we could maybe go to Lake Winola, Nicholson and other parts of Wyoming County from here.”

“The best part for me is that I live just a mile away,” said Lackawanna County Commissioner Chris Chermak. He added that he wished the trails had been accessible when he ran cross country as a high school student.

Conservancy board members and other supporters are constantly working to “connect the dots” of the former Northern Electric Street Railway trolley tracks that ran from Scranton through the Clarks Summit area and on to both Lake Winola in Wyoming County and Montrose in Susquehanna County. The trolleys bore daily passengers and tourists from 1908 to 1932. The history student in me is fascinated by these facts and the photos on the trail signage that depicts the era.

For every thousand feet of trail improved, it feels like there was a hundred hours of planning, communication and leveraging of resources to complete this new phase of the project. It’s not easy. A lot of people would give up after a couple of months.

These have become “passion projects” for Cabot. We seek out another one every few years to support, bringing together natural gas resources. As we celebrate Earth Day 2021, follow the Countryside Conservancy on Facebook and check out the Trolley Trail.