Northeastern Pennsylvania students who attended the recent Think About Energy in Hazleton received an eye-opening description of gas industry opportunities.

More than 120 guests were packed into the banquet room at the Valley Country Club in Sugarloaf, Luzerne County, on Oct. 2 for the Think About Energy Briefing sponsored by the Greater Hazleton Chamber of Commerce. Among the guests to receive an update on production opportunities from industry experts and elected officials were 40 high school students from the Hazleton Area School District. 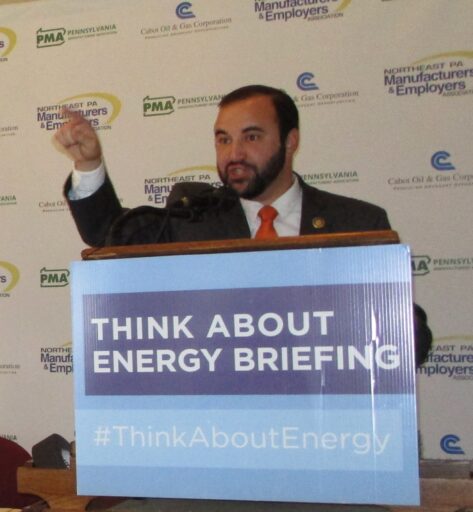 Rep. Aaron Kaufer addresses students in attendance at the ‘Think About Energy’ conference held at the Valley Country Club on Oct. 2.

Key speakers included Pennsylvania House Speaker Mike Turzai, Tom Gellrich of Topline Analytics, Rep. Aaron Kaufer (PA-120), Rep. Tarah Toohil (PA-116), Cabot Oil & Gas Corporation external affairs director George Stark, and Chamber president Mary Malone. Toohil was credited for sponsoring the participation of the students, whom Malone referred to as “our up and coming human resource.” The youths were addressed many times throughout the event as the generation that has the most to gain from the decisions being made now by their legislators.

Toohil and Kaufer recalled that, during their high school eras, students who showed the most potential were encouraged to leave the area if they desired a lucrative future. Each of the speakers, in turn, told the teens in attendance that those days are over. “We want you to stay here,” Toohil told them. “We want you and your friends and your family to have jobs here.”
“I want to see a resurgence of family-sustaining jobs in Pennsylvania,” Turzai concurred. “Changing legislation is part of that.”

Gellrich bubbled with enthusiasm over what he sees as a new industrial revolution and an issue of national security. And Stark assured everyone that there is enough natural gas coming down the pike to fuel all their dreams. “We know that we can drill 3,000 more wells in Susquehanna County and get it into Luzerne and Lackawanna counties,” he stated.
The variables setting up the Hazleton area for unprecedented growth are its proximity to natural gas pipelines, vast acreage devoted to industrial use, access to interstate highways and railroads, and pending legislation that make the aforementioned elements more attractive to big businesses.

Several bills currently working their way through the Pennsylvania House of Representatives will increase the incentives for major corporations to invest in northeast Pennsylvania and especially, panelists suggested, the Hazleton area.

Toohil followed some dire statistics about the imminent closure of three nearby businesses and loss of some 2,000 jobs with assertions that House Bill 1104 – Energize PA – is the antidote for economic recovery. The shuttered industrial parks in the region would become an asset, Toohil maintained, noting that the database of ‘brownfields’ that is part of HB1104 will put a bullseye on Hazleton. “We have sites for you, and we’ll clean them up,” she stated. “We want to dust the rust off the ‘rust belt.’”

“This bill has the opportunity to make up for those losses,” Kaufer concurred. “This is the best chance in our lifetimes for a truly transformational economy.”

Kaufer explained that HB1104 is based largely on successful legislation that allowed for the investment in and construction of the Shell Pennsylvania Petrochemicals Complex in Beaver County. Currently the largest construction site in North America, there are 6,500 workers building the “cracker plant,” as it is more commonly known, and approximately 700 highly skilled people will be needed to maintain daily operations once it is opened.

Western PA produces “wet gas,” and ethylene is one of the impurities that, once separated, lends itself to the production of polyethylene – or plastic pellets. Though the “dry gas” produced in northeastern PA wells is inherently more pure, there are still byproducts that can be manufactured as methanol, urea, and ammonia, which are foundations for products like windshield washer fluid and fertilizers.

Gellrich provided the statistics that put Hazleton and northeast Pennsylvania on the global stage. As the world reels from the recent drone strikes on Saudi oil fields and petrochemical facilities there and other ongoing uncertainties, 70 percent of new investment in American-based production of the same materials is coming from foreign corporations, “because they know that the game is over in other parts of the world,” Gellrich asserted. Thanks to abundant, low-cost natural gas, “We can now make those products cheaper here in the U.S.”

Aging facilities in Hurricane-prone southern states are also being passed over in a search for something new, Gellrich explained. The Shell plant near Pittsburgh will be so advanced technologically that it will be able to run continuously for three years before its first shut down. Similar plants are already in the talking stages, presenting opportunities for today’s youths that will last for decades. 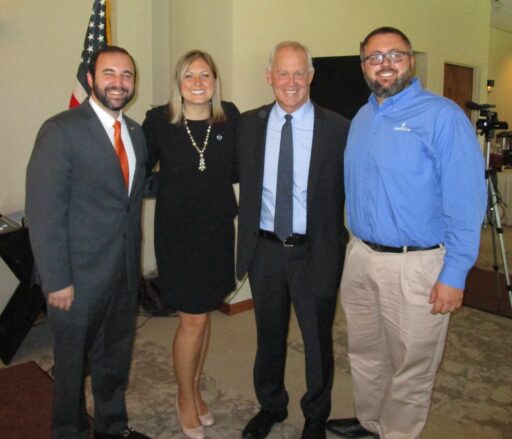 It is that succession of constructing new plants and bringing them on line, Turzai related, that will fuel the simultaneous need for trade workers and technicians. “Even though they are competitors, they work together,” Turzai said of the investors. “It helps them if there’s already a facility there. It’s a system of producers in the same area working off each other.”

Three of the Hazleton students – Brad Reyers, Dante Alfieri, and Selena Middleton – posed questions to the panel: “How many jobs will be available when we graduate?” “What courses should we be taking?” and “What do you do about the negative effects of drilling?”

Stark stressed the immediate need for skilled workers in Susquehanna County and asserted that the demands to build and staff plants in the Hazleton area would parallel that. Gellrich emphasized the importance of math and science studies, as well as chemical engineering and told the students that the incoming companies prefer to hire local people who want to stay in a given area.

Responses to Middleton’s concerns about the environmental impacts of drilling came both Stark and from Wyoming County Chamber of Commerce president Gina Suydam, a guest at the event. Cabot recognizes that disturbing the land for any industrial use has consequences, Stark noted, but the company works hard to mitigate those circumstances and “leave it a better place than how we found it.”

Suydam, who resides and works amidst the gas fields, encouraged Middleton to be wary of what she might read about the gas industry on social media that suggests that land is destroyed. “Come and see what it looks like when it’s done,” Suydam said of completed gas pads and pipeline right-of-ways. “They leave our land nicer and better fertilized than we’ve seen in years.

Hazleton Academy of Sciences principal Marie Ernst said that the event exceeded her goals of teaching her students about potential careers in the gas industry and its trickle-down effect on the local economy. “I want to do anything I can to prevent the ‘brain drain’ prominent throughout Pennsylvania,” she remarked, adding, “I think it is important for students to go to events like that and see how adults conduct themselves, in addition to the exposure to the industry leaders and government officials.”

Tony Sanduch, who coordinates electrical and industrial technology studies at the Hazleton Career Center, related that his students continued the discussion on the way back to the school and again the next morning, asking Sanduch if he believes what the panel members were saying about job growth.

“I definitely do. In general, the future for tradespeople is phenomenal,” he told the students. “I’m excited about what they were saying about the future of Pennsylvania.” Sanduch would also like to have Cabot representatives come back to Hazleton and speak directly to his students.