Society of Environmental Journalists Is About Anything But Journalism

The Society of Environmental Journalists isn’t about journalism. It’s about spreading the Green Gospel and achieving earthly salvation for the gentry class.

One of our readers wrote yesterday to encourage me to check into the Society of Environmental Journalists. I was already familiar with it. I also knew it is was funded by all the usual gentry class suspects, but I hadn’t looked into it in a while, so I investigated further. What I found was a machine funneling money to supposedly objective journalists and media outlets for the purposes of churning out propaganda as news.

There’s nothing wrong with propaganda per se. It helps win wars, it allows interest groups with varying agendas to compete in the marketplace of ideas and if you call it “branding” it’s a recommended best practice. When it masquerades as news, though, it practices to deceive. Consumers of it don’t get the benefit of being able to discount for bias. It’s deliberately hidden from them, in fact, behind a screen of supposed objectivity.

I use the Pittsburgh Post-Gazette example for a reason. It carried a story in June by Don Hopey and David Templeton headlined as “Gov. Tom Wolf asked to investigate possible link between Pa. fracking, childhood cancers.” The article, a smear job, was part of an obviously orchestrated campaign by Food & Water Watch, the Southwest Pennsylvania Environmental Health Project and other Heinz Endowments shills to tar the natural gas industry with phony health claims about childhood cancers in the region. It was a thoroughly disgusting piece of yellow journalism.

What readers didn’t learn is that Don Hopey, one of the authors of the story, is a former President of the Society of Environmental Journalists (2012-2014). He’s still active, in fact, joining Heinz, the Doris Duke Charitable Foundation (funder of Gasland activities) and the fractivist Energy Foundation, et al in donating money for “hard-hitting environmental journalism.”

The “hard hitting” part is illustrative of what these “environmental journalists” are really all about and it isn’t journalism. Indeed, the Society website tells us the real mission is to seed stories, hard-hitting ones, no doubt, on the order of former President Don Hopey’s hit piece pulling the natural gas industry into a story based on nothing but pure speculation by his fractivist allies: 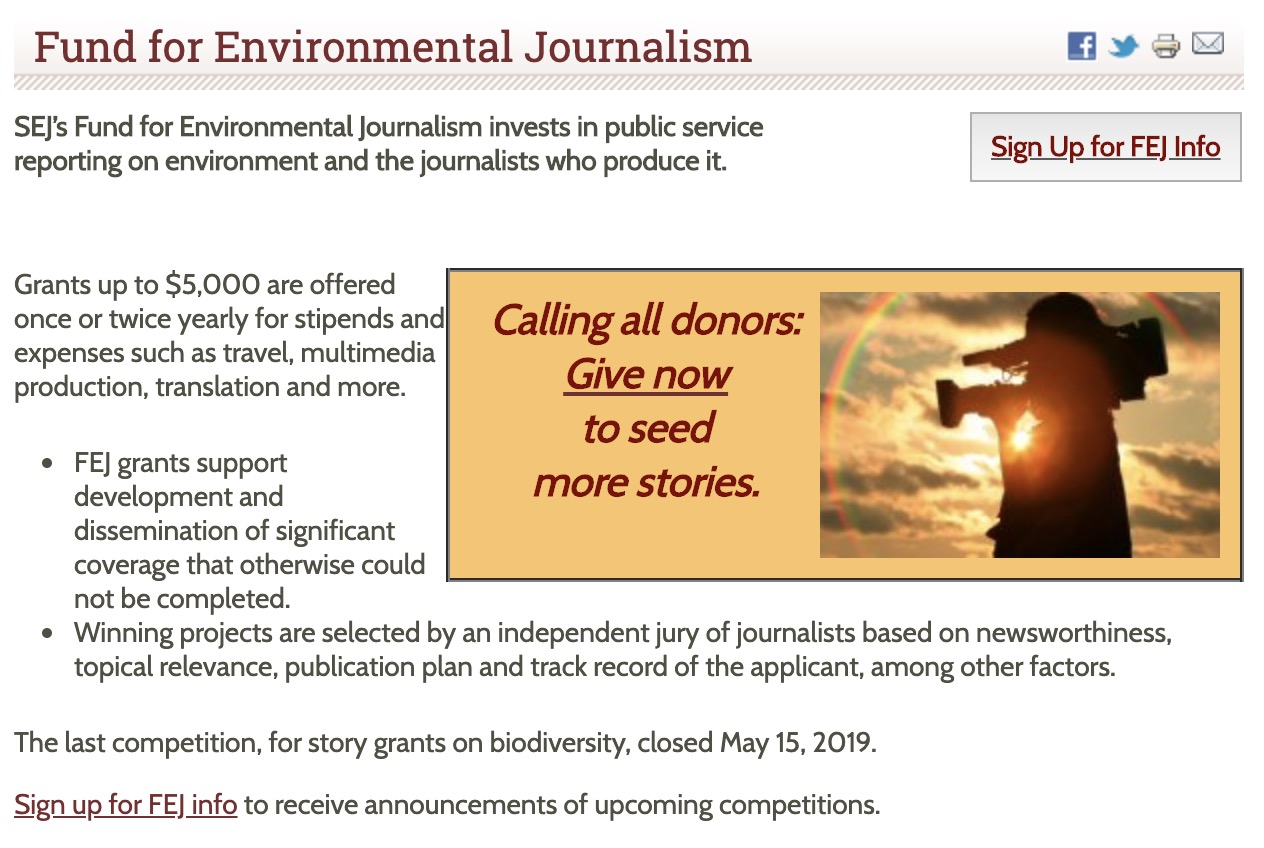 Note also the structure of the opening sentence, if you can call it that. It’s just plain weird. But, that’s not all that’s weird about the SEJ. Take a look at its latest 990 IRS return. I have reviewed hundreds of 990 returns and have rarely seen one with so many anomalies, beginning with the fact the organization claimed, in 2017, to have two co-executive directors who also happened to be related as in-laws (see Schedule O). Top that off with the fact their salaries are nowhere disclosed and they are not listed as officers on Part VII of the return as required.

Then, there is the fact the organization made one huge donation of $170,000 in 2017 to The Guardian newspaper for its “coverage project.” You can read all about that here. The Guardian says “more than 60 news outlets worldwide have signed on to Covering Climate Now, a project to improve coverage of the emergency.” The project, in other words is to hype global warming, not as a legitimate issue worthy of serious debate but, rather, an emergency demanding immediate governmental action that would, just coincidentally, end up shoving more power and money to The Guardian‘s allies.

There’s no journalism in any of this. The Society of Professional Journalists, in fact, calls for independent reporting with these standards:

• Refuse gifts, favors, fees, free travel and special treatment, and avoid political and other outside activities that may compromise integrity or impartiality, or may damage credibility.

• Be wary of sources offering information for favors or money; do not pay for access to news. Identify content provided by outside sources, whether paid or not.

• Deny favored treatment to advertisers, donors or any other special interests, and resist internal and external pressure to influence coverage.

• Distinguish news from advertising and shun hybrids that blur the lines between the two. Prominently label sponsored content.

The Society of Environmental Journalists (or, is it “Hard-hitting  Environmental Journalists”) violates every single one of these standards. It’s not doing journalism. It’s doing advocacy, the same as we do here at NaturalGasNOW, but we don’t lie about what we’re doing. We’re advancing our viewpoint and challenging those of the opposite view. The SEJ is pretending to be something it’s not and its writers are putting out advocacy stories disguised as news. That’s shameful.