Renewable Fortune Making at the Taxpayer Trough Is Driving Environmentalism

The potential for renewable fortune making trillions off ratepayers and taxpayers is driving both energy policy and environmentalism.

Anyone who has followed this blog at all over the last eight years knows what most people following energy policy and environmentalism today don’t want to know; that it’s really all about the money for those truly calling the shots. Oh, there are plenty of true believers in green causes and enough guilt-ridden trust-funders to fund all of their silly adventures in the interest of making wildernesses for their personal enjoyment. This isn’t the biggest factor, though. No, it’s the investors engaged in renewable fortune making who are driving the bus and they hope to steal trillions from you, me and the government. 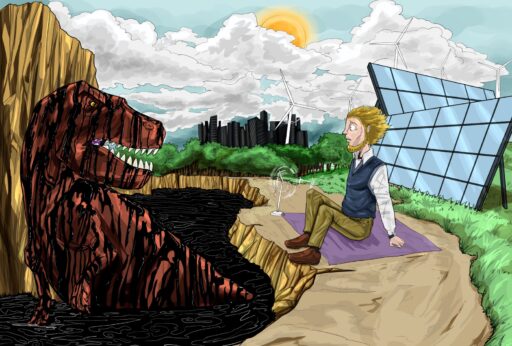 Many of those riding the bus suspect something isn’t quite right. The global warming scare stories never seem to materialize. One renewable fiasco after another raise its ugly head. No wants acres of solar installations or wind turbines turning 60 stories over their head. Subsidies voted in as tools to demonstrate green potential never seem to end. The bus is taking a very odd route to the promised destination. Still, no wants to imagine they’ve been duped, so the renewable fortune making bus keeps rolling down the wrong highway as riders keep pointing out the sights, blithely ignoring the reality.

The proof that it’s all about the renewable fortune making opportunities and has little or nothing to do with smart energy policy, a greener environment or a cooler planet, comes from no less than JP Morgan Asset and Wealth Management, which just put a 44-page document titled as a “2021 Annual Energy Paper.” It’s about as disgusting an appeal to feeding at the government trough as one could dream up. It begins with the utterly ridiculous picture above and this:

Absent decarbonization shock treatment, humans will be wedded to petroleum and other fossil fuels for longer than they would like. Wind and solar power reach new heights every year but still represent just 5% of global primary energy consumption.

After this bit of theatrics, the paper gets into what JP Morgan Asset and Wealth Management is really about:

The world is gearing up to spend trillions of dollars to accelerate the fourth great energy transition, this time to renewables. Market valuations of renewable companies skyrocketed in early 2020; I’m not sure all of them make sense. One example: why did the total valuation of the world’s competitive, high-volume auto industry gain 70% in market capitalization in the three years ending January 2021? A subsequent selloff eroded some of the gains but the increases since 2019 are still among the largest on record. Below we compare these renewable gains to prior episodes, some of which were sustainable while others were not. Generous subsidies, tax incentives and grid preferences will sustain many of them even if they are unprofitable. For investors, the challenge will be sorting out the long-term winners that will survive even when/if the subsidies go away.

Let me interpret, if you will. “Governments around the world are going to coerce trillions of dollars from ratepayers and taxpayers for projects that probably make no sense, but you should get in on the opportunity to feed at the trough. Call us today. We’re in the business of renewable fortune making.”

This is the reality; the green new deal is about the money and nothing else