Northern Access Pipeline Project Gets Another “Nyet” from Cuomo’s DEC

Northern Access Pipeline developer NFG has received another denial of water quality certification from Andrew Cuomo’s DEC but the project will get built. 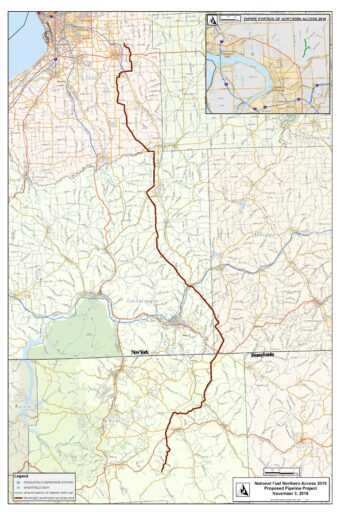 NFG’s $500 million Northern Access Pipeline project includes building 97 miles of new pipeline along a power line corridor from northwestern Pennsylvania up to Erie County, NY. The project also calls for 3 miles of new pipeline further up, in Niagara County, along with a new compressor station in the Town of Pendleton. Although FERC granted permission to build it in February 2017, New York’s DEC arbitrarily and capriciously (at the direction of Andrew Cuomo) tried to block it by refusing to issue a federal water/stream crossing permit.

Last August FERC issued a decision overruling the DEC to allow NFG to proceed with building the Northern Access Pipeline project. The DEC subsequently asked FERC to reconsider the decision. FERC did, and ruled in April that they were right the first time; the DEC forfeited the right to issue a permit for the project by taking too long.

In February of this year the Second Circuit of the U.S. Court of Appeals ruled, “vacating” (or removing) the DEC’s rejection of the stream crossing permit, sending the application back to the DEC with instructions to explain its decision. Wait, what? Didn’t the DEC explain its decision in the original rejection? Apparently not, at least not to the judges’ liking. They told the DEC, verbatim in their order:

The new/second rejection by DEC issued last week is their “here’s our explanation to satisfy the Second Circuit” response. In essence, it’s a bunch of lies and distortions and excuses to try and paper over the real reason why DEC rejects the project–because they’ve been instructed to do so by Andrew Cuomo, for political reasons. Here is the story:

For the second time, the state Department of Environmental Conservation has refused to grant a water quality certificate to National Fuel’s Northern Access Pipeline, which would cross 192 streams on its 97-mile route through Allegany, Cattaraugus and Erie counties.

The 24-inch-wide pipeline would carry fracked natural gas from Pennsylvania to a connection with a Canadian pipeline beneath the Niagara River. The new pipeline would be laid within a 75-foot-wide right of way. Some property owners have resisted granting easements for the work, however.

In 2017, the DEC refused to issue the water quality certificate, but the Federal Energy Regulatory Commission said the refusal was invalid because the DEC missed a deadline to issue it, and in February, the Second Circuit Court of Appeals said the DEC should “more clearly articulate its basis for the denial.”

Thursday, the DEC did so in a 20-page letter to the company, asserting the project would damage too many streams, especially by churning up too much sediment to enable them to meet state water quality standards, and harm too much fish habitat.

“If allowed to proceed, the project would materially interfere with or jeopardize the biological integrity and best usages of affected water bodies and wetlands,” the DEC’s letter said.

However, federal regulators have denied that the DEC has the right to make any rulings about Northern Access.

In April, FERC refused to give the DEC a second chance at a hearing before the commission, citing the missed 2017 deadline to rule on the water quality permit. The DEC appealed that ruling to the Second Circuit in June.

“Once DEC’s deadline to act passed, its subsequent actions, such as this new denial, are of no consequence,” Merkel said. “We are considering our legal options and continue to work to finalize the remaining federal authorizations to move this project forward.”

Pennsylvania already has granted a water quality permit for the project.

“While we had positive rulings in the courts, we’re in a position where we could apply for a notice to proceed in the near future,” National Fuel President and CEO David Bauer said during an earnings call with Wall Street analysts last week.

“That said, we’re thinking this is really a longer-term project likely in the 2022, 2023 time frame,” Bauer added.

The only outside hope DEC has now is in a request they filed with the Second Circuit in June asking the court to overturn FERC’s approval of the Northern Access project. Once that lawsuit plays out over the next year or two, we should have a final resolution. As NFG’s new CEO David Bauer said recently, they now expect to build and have Northern Access online in 2022-23.

Editor’s Note: An ever alert reader and real journalist asks “Is it important to the article that the pipeline would carry “fracked” natural gas?” Of course not. This media bias in action, an example not of journalism but of media advocacy now taught in journalism schools and apparently practiced at the Buffalo News and at so many advocacy outlets we once called newspapers.