Readers pass along a lot of stuff every week about gas, fractivist antics, emissions, renewables, and other news relating to energy. As usual, emphasis is added.

How NOT to Influence People and Win Friends

This may be the tipping point for over-the-top, jump-the-shark, wolf crying by those trying to advance the fight against global warming through fear-mongering and obsessing on stupid stuff:

Using the most common type of inhaler to treat conditions such as asthma is as bad for the environment as eating meat, a new study suggests.

Research led by the University of Cambridge found that inhalers, particularly the metered-dose style, account for almost 4% of the greenhouse gas emissions of the NHS.

Replacing just 10% of them with the cheapest equivalent dry-powder inhaler, which have a carbon footprint between 10 and 37 times lower, could save the NHS £8.2m a year and reduce carbon dioxide emissions by 58,000 tonnes a year. That is the same as 180,000 return car journeys from London to Edinburgh.

The researchers said that on an individual level, replacing each metered-dose inhaler with a dry powder equivalent would save between 150kg and 400kg a year.

Give us a break, please, And, if you thought the green ideologues were only after oil and gas companies, think again; they’re you even if suffer from asthma that natural gas has done so much to alleviate in places such New York City and elsewhere. Perhaps there’s a better approach to influencing people and winning friends? Like, recognizing how natural gas has dramatically lowered CO2 and other emissions?

Our buddy, Jim Wills, picked on this fantastic news:

The United States Traditional Energy and Energy Efficiency Sectors in 2018 employed 6.7 million Americans in 2018, according to the US Energy and Employment Report 2019, with nearly 1.5 million directly employed by the oil and gas industry, and another 1.2 million workers employed by the power generation sector, which includes all types of power generation, including oil and gas. 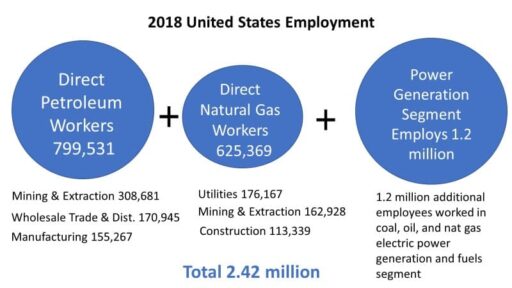 Employment in the oil and gas extraction and support services, specifically, was at its highest level in 2018 since the fall of 2014—the next most recent high.

And those jobs? None too shabby if you’re interested.

America’s energy independence push has resulted in a new high for US oil and gas workers. In fact, the energy and utility sectors have the highest median salary of any industry in the S&P 500…

The Absurd Costs of Green Political Correctness in California

IER has provided some much needed perspective on the cost of being green in California, our largest failing state:

According to AAA, California’s gasoline prices are the highest in the United States and are $1.45 more than the average U.S. gasoline price. While California’s governor, Gavin Newsom, wants to blame the oil companies and has asked his attorney general to investigate them for conspiring to keep gasoline prices artificially high, he should be looking at his state’s laws and regulations as the main culprit. 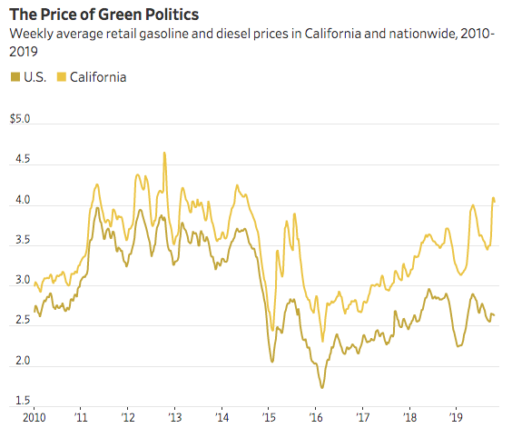 According to the state’s Energy Commission, about half of the price difference between California’s gasoline price and the national average gasoline price is due to California’s taxes, its cap-and-trade policy, and its low-carbon fuel standard; and another third is due to higher refiner and retailer margins because of higher regulatory costs and less competition.

Is it any wonder folks are running away from California and headed to Texas? No.