Readers pass along a lot of stuff every week about natural gas, fractivist antics, emissions, renewables, and other news relating to energy. This week:

Shifty Josh Shapiro is Pennsylvania’s biggest phony and nothing proves it so completely as this announcement from his Attorney General’s office:

Attorney General Josh Shapiro today announced that Sunoco Pipeline L.P., and ETC Northeast Pipeline LLC (ETC), both subsidiaries of Energy Transfer, L.P. (Energy Transfer), were convicted of criminal charges related to their conduct during the construction of two major pipelines in Pennsylvania. Mariner East 2 Pipeline, which crosses 17 counties in the southern tier of Pennsylvania, and Revolution Pipeline, a 42.5 mile pipeline that starts in Butler County, and is routed through Beaver and Allegheny counties, and connects to a gas processing plant in Washington County. 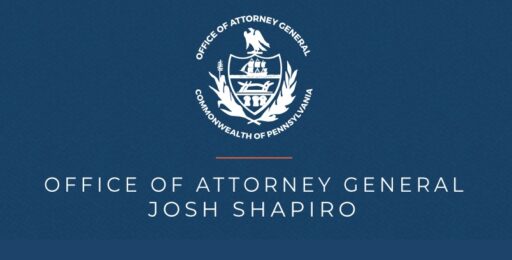 As part of the agreement, Energy Transfer will pay for independent evaluations of potential water quality impacts for homeowners from the construction of the Mariner East 2 Pipeline and offer approved mechanisms for restoring or replacing the impacted private water supplies. An independent, professional geologist will review water testing and advise on water quality and impact. Energy Transfer will also pay $10 million towards projects that improve the health and safety of water sources along the routes of the pipelines.

What is not mentioned, of course, is that this case involved charges he brought against the pipeline developer during an event at Marsh Creek in Chester County — just days after publicly announcing his campaign to be the Democratic nominee for governor in October 2021. It was a political stunt, in other words, and as the Pennsylvania Energy Infrastructure Alliance (PEIA) notes, Shapiro accomplished absolutely nothing other than stealing a previous settlement agreement between DEP and Energy Transfer for himself:

“It’s important to remember that nearly all the instances of construction woes that the attorney general cited in his original presentment had by then already been settled between the Pennsylvania Department of Environmental Protection and the pipeline developer. And, in fact, the developer had already paid fines to the commonwealth for those charges.”

This is why he’s appropriately called Shifty Shapiro…

Fires? Recycling? Don’t Worry About It, Says the Biden Administration!

This story tells us everything about the ideologically blinded Biden administration:

Thanks to the bipartisan Infrastructure Investment and Jobs Act, there’s more than $60 billion available for grid transportation investment.

Plus, $5 billion is earmarked for state grants to help establish high-capacity charging stations on every highway in the United States, and an additional $2 billion for community charging. [bold, links added]

The hope, according to Alex Schroeder, executive lead at the Joint Office of Energy and Transportation, is to eliminate range anxiety and change consumer behavior when it comes to buying vehicles.

However, at a panel discussion at the 2022 Nation Conference of State Legislators (NCSL) on the “Promise and Challenges of Electric Vehicles,” State Rep. Steven Galloway (R-Mont.) pointed out potential issues.

“Lifecycle the batteries, seven to 10 years. What are we gonna do? Talking to the recyclers, it’s a big issue.”

Galloway stated that currently, 100 percent of ICE vehicles are recycled. But the same isn’t true for electric vehicles (EVs).

“Right now, most [EVs] are just piling up and nobody wants to touch them. It’s causing fires at home, you know, there are different issues that really aren’t publicized.” 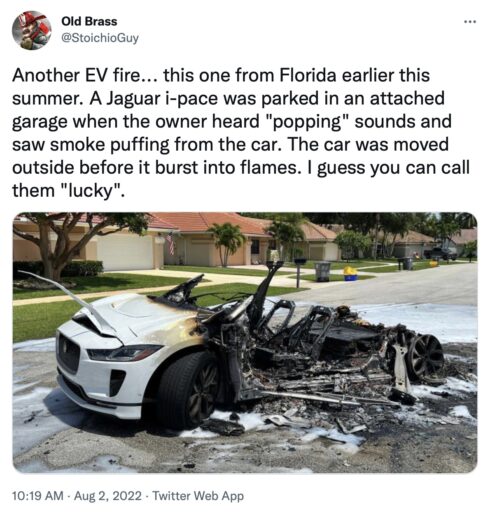 Galloway also said that in Montana, there’s not enough wind or solar to provide energy for the type of integration the federal government is planning.

He said that it gets frigid in Montana, and cold significantly impacts battery life. He wanted to know what solutions if any, the federal government had for these problems.

Darned good question and if you read the whole story you’ll see there are no answers, just blind optimism they’ll suddenly appear. Notice, too, how little the Biden administration ideologues care about the impact of their radical policies on rural areas such as Montana.

Bidenflation and Supply Chain Mess Lead to Panic Selling of Our Oil!

Biden bumbling has infected every aspect of our life here in the United States and abroad as well. Inflation, supply chain mismanagement, global warming zealotry and so much else, all it done not only incompetently but too often with malice (e.g., denying Florida COVID treatments that worked). It’s also impacting our ability to produce oil.

Matt Hagerty, a senior analyst at BTU Analytics, pointed out that “frac crew bottlenecks” are a “significant headwind for US producers headed into 2023.” He said frac sand and labor shortages, elevated inflation, and limited frac fleets are a “perfect storm.” 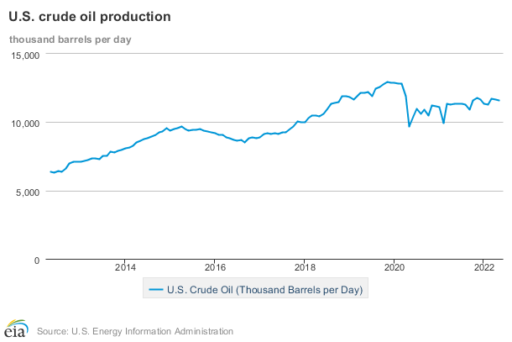 A similar message was conveyed by Exxon Mobil, whose CEO said that global oil markets might remain tight for three to five years primarily because of a lack of investment since the pandemic began.

In response to shale’s dismal ramp-up in production, the Biden administration has panic sold millions and millions of barrels of oil from the Strategic Petroleum Reserve, which has been drained by 125 million barrels so far in 2022 — all in hopes of lowering gasoline prices at the pump ahead of the midterm elections in November.

Not only Biden sell off our oil; he sold a big chunk of it to Communist China. What do these totalitarians have on Joe? Even in the unlikely event they don’t have anything on him, another reader describes the Biden energy policy in a nutshell as “We’re going to cut off your “you-know-whats” but please produce all you can today to save us politically.” He also notes C.S. Lewis aptly described the situation in which we find ourselves when he wrote that “We make men without chests and expect of them virtue and enterprise. We laugh at honour and are shocked to find traitors in our midst. We castrate and bid the geldings be fruitful.” This is Joe Biden’s energy policy.