Natural Gas Exports Set to Soar Thanks to Appalachian Shale

Appalachian shale production has been nothing short of phenomenal and has set the stage for natural gas exports to soar via both LNG ships and pipelines.

Yesterday, chatting with a pro-gas friend, we both remarked on the fact the solution to low prices is low prices, just as the solution for high prices is high prices. It’s basic economics, the law of supply and demand, of course, although it’s far beyond the comprehension of our fractivist friends and other enemies of capitalism to grasp. When the supply is high, the price decreases and when the price is low, demand goes up and, eventually, prices do as well. It’s a never ending search for equilibrium that consistently adapts to the votes of consumers and it’s a beautiful thing. And, now low prices are about to unleash tremendous growth in natural gas exports. 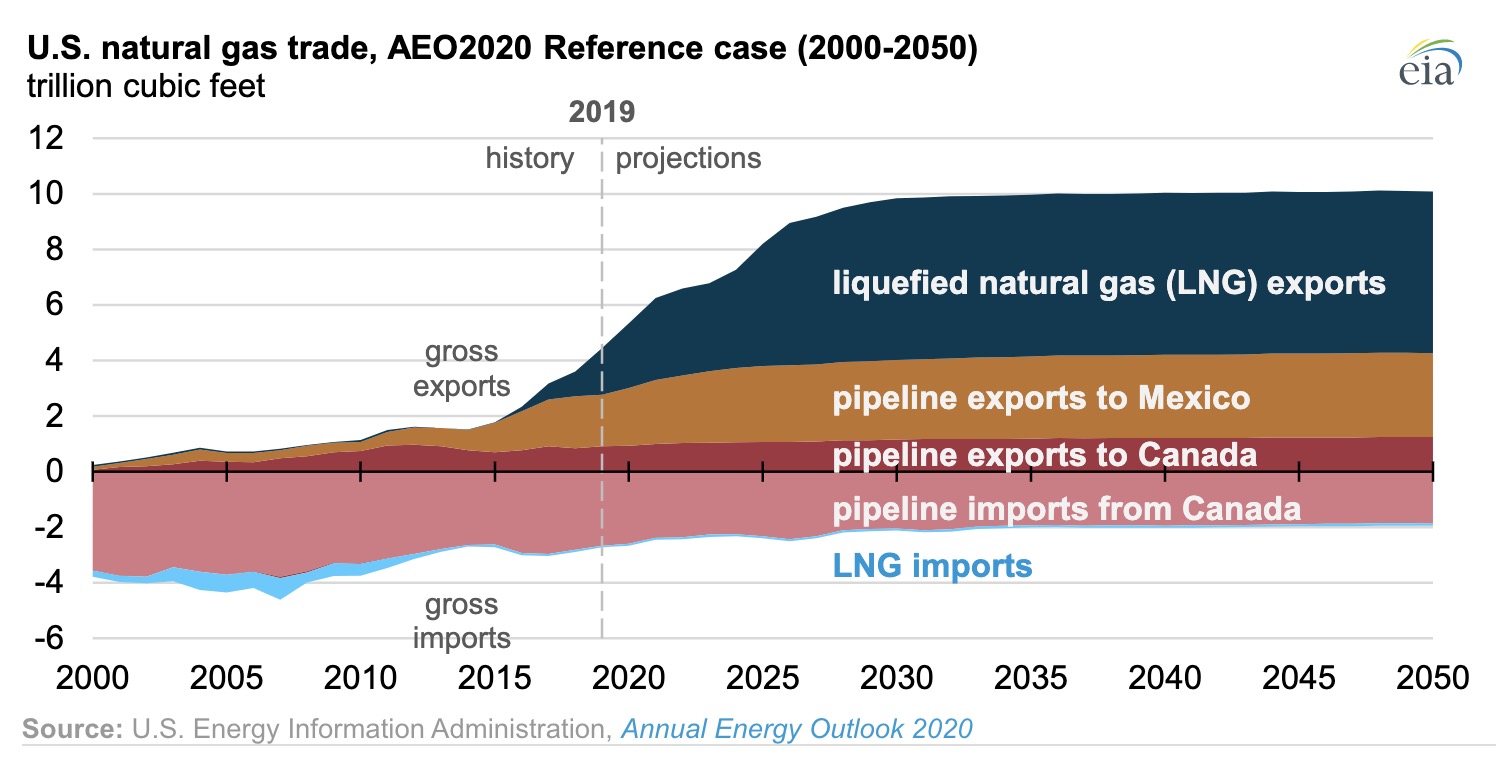 The EIA gives us some insights in the story accompanying the above chart (emphasis added) showing exports are expected to absolutely soar over the next decade and remain high.

In the Reference case, both U.S. natural gas exports by pipeline and U.S. LNG exports continue to grow through 2030. LNG exports account for most of the export growth because more LNG export facilities are becoming operational and more projects are under construction. In the Reference case, EIA projects that LNG exports will almost triple, from 1.7 Tcf in 2019 to 5.8 Tcf in 2030, the equivalent of nearly 16 billion cubic feet per day (Bcf/d). LNG exports remain at this level through 2050 as U.S.-sourced LNG becomes less competitive in world markets and as more countries become global LNG suppliers.

U.S. LNG exports are more competitive when oil prices are high (as in the High Oil Price case) and U.S. natural gas prices are low (as in the High Oil and Gas Supply case) because of pricing structures that link Brent crude oil prices to LNG prices in many world markets. In the High Oil Price case, U.S. natural gas net exports reach nearly 13 Tcf by the late 2030s, most of which is LNG. Conversely, in the Low Oil Price case and Low Oil and Gas Supply case, U.S. LNG is less competitive globally and remains lower than 5 Tcf per year through 2050.

Another chart compares the projections: 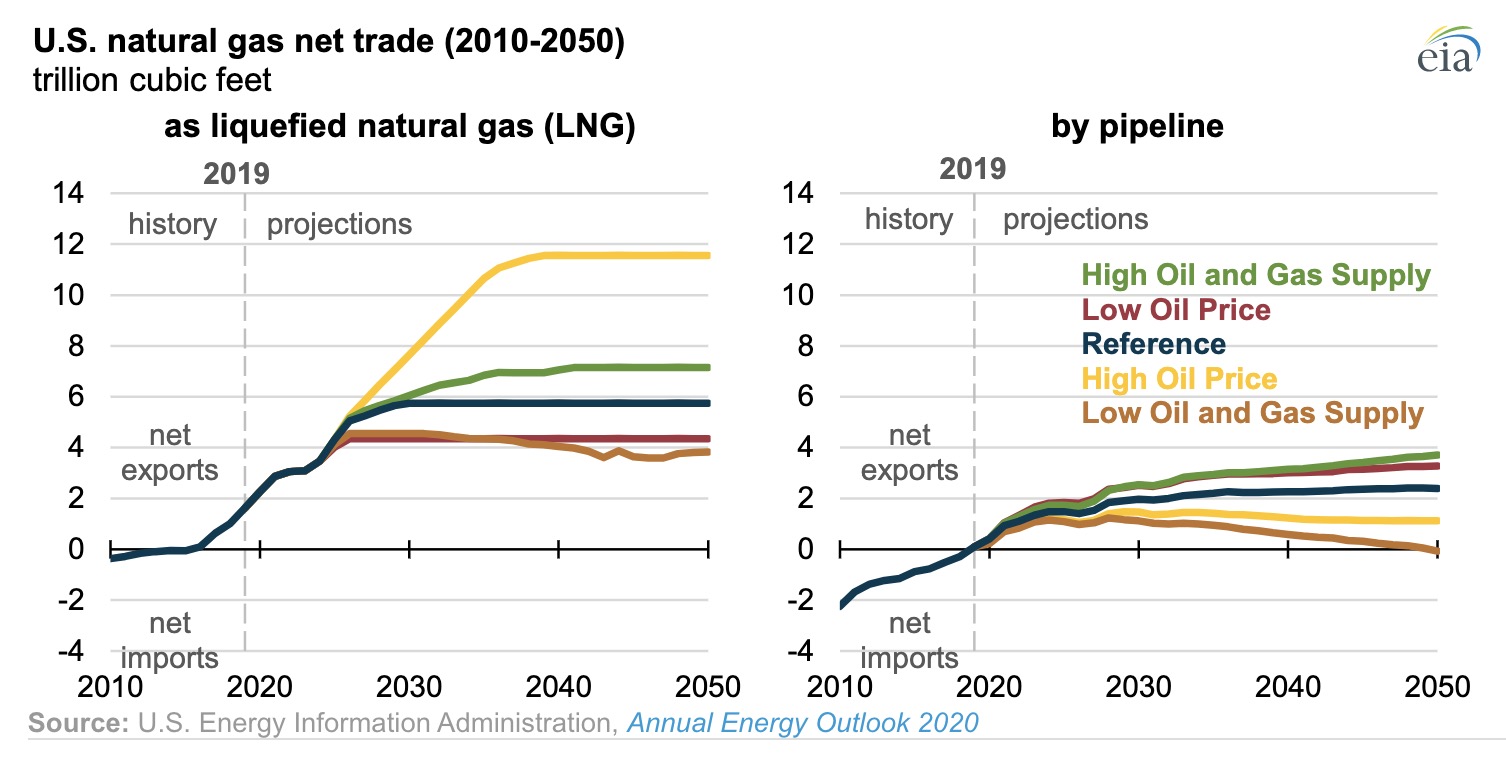 Low prices yield more natural gas exports; it’s really that simple. And, those low prices, while making it necessary for gas companies to aggressively compete in lowering costs with plenty of pain to go around, open the door to natural gas exports that are eventually going to modestly raise prices. Over time, though, the consumer is rewarded with long-term savings that are nothing short of remarkable and rural economies are invigorated by the natural gas development.

The system works in other words. It’s a system made possible in this case by the shale revolution and, especially, the success of Appalachian shale development: 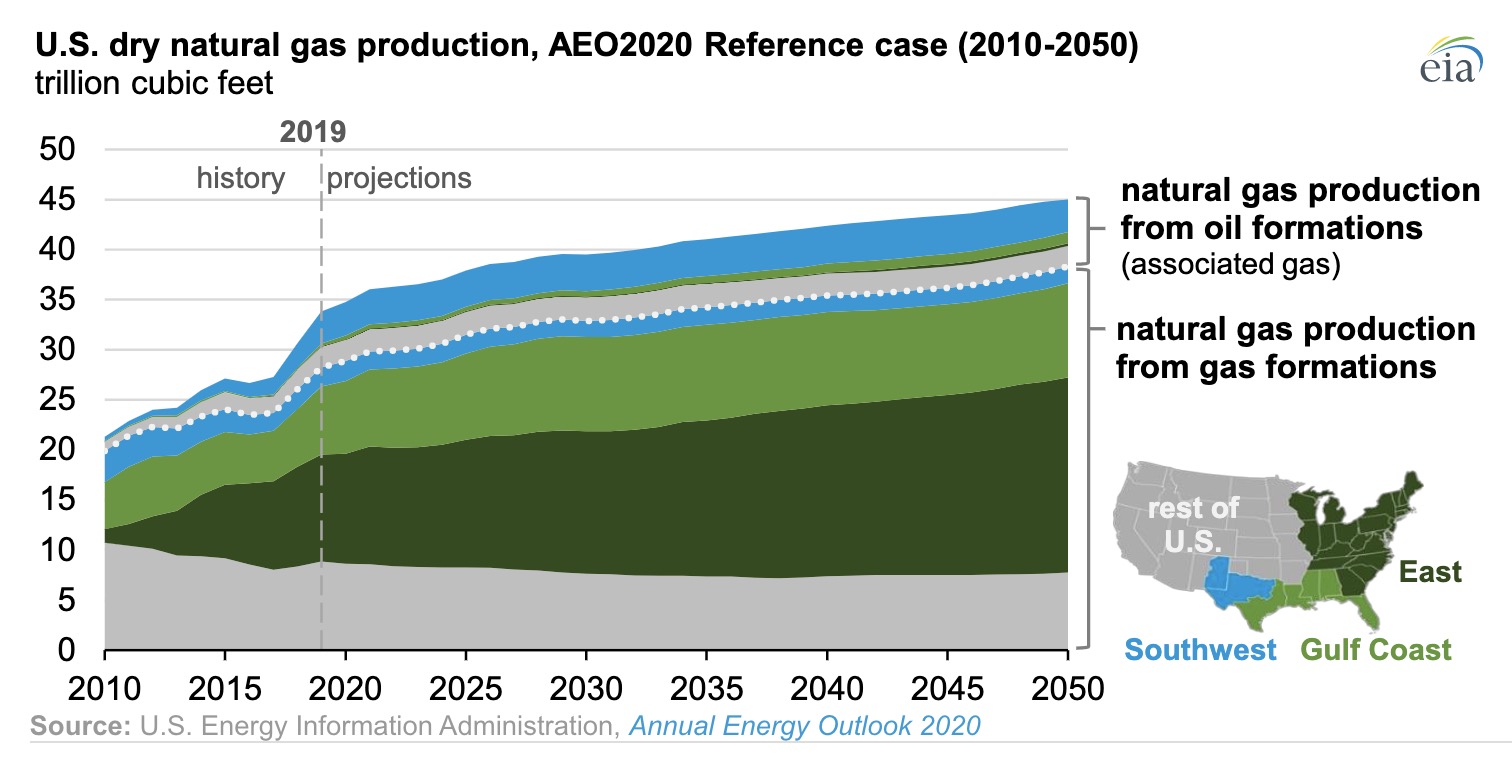 What all this means is that we are in an extremely strong position to supply the EU, Mexico and Asia with natural gas they need well into the future. We are energy dominant. God bless the shale revolution!