Milton Friedman and His Timeless Insights on Energy and Freedom

Milton Friedman was a great gift to those valuing freedom, liberty and economic common sense. He was a superb thinker and his insights on energy invaluable.

We celebrated, on July 31st, the 107th anniversary of the birth of economist Milton Friedman(1912–2006). Primarily known for his work on monetary economics, Friedman was a keen observer of energy economics and public policy whose insight remains valid today.

Early on, Friedman understood how major energy regulation was sponsored by an industry segment. “Few U.S. industries sing the praises of free enterprise more loudly than the oil industry,” he stated in 1967. “Yet, few industries rely so heavily on special government favors.”

Friedman was referring to oil-demand proration in the major oil states (excepting California), as well as federal oil-import limits, two complementary programs that governed from the 1930s through the 1960s. It was this political bias that contributed to the backlash against oil and natural gas in the 1970s that still haunts the industry today. 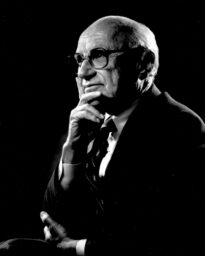 Friedman’s harsh reaction to President Richard Nixon’s price freeze of August 1971 is particularly important for the energy debate. It was Nixon’s surprise intervention, not the Arab oil embargo, which created the oil shortages and a decade of spiraling interventionism.

“I regret exceedingly that he decided to impose a ninety-day freeze on prices and wages,” Friedman wrote at the time. “That is one of those ‘very plausible schemes … with very pleasing commencements, [that] have often shameful and lamentable conclusions.’”

Indeed, what began as a temporary program was extended several times and codified in legislation for the oil industry in 1973. The result was predictable. In Free to Choose(1979: p. 14), Milton and Rose Friedman explained how the dreaded gasoline lines were not the result of foreign manipulation but domestic regulation:

The long gasoline lines that suddenly emerged in 1974 after the OPEC oil embargo … and again in the spring and summer of 1979 after the revolution in Iran, [came after] a sharp disturbance in the supply of crude oil from abroad. But that did not lead to gasoline lines in Germany or Japan, which are wholly dependent on imported oil. It led to long gasoline lines in the United States, … for one reason and one reason only: because legislation, administered by a government agency, did not permit the price system to function.

There is one simple way to end the energy crisis and gasoline shortages tomorrow—and we mean tomorrow and not six months from now, nor six years from now. Eliminate all controls on the prices of crude oil and other petroleum products.

That “tomorrow” came in 1981 to end the energy crisis. Better yet, the negative effects of oil price and allocation controls were so pronounced that neither political party has advocated such intervention ever since.

Friedman explained how a surplus of regulation caused a shortage of oil and gas. He did not buy the running-out-of-resources argument, elegantly dressed as Harold Hotelling’s fixity/depletion model, as did so many economists–even those at the hitherto resource-optimistic Resources for the Future.

In his 1978 essay, “The Energy Crisis: A Humane Solution,” Friedman wrote that oil, gas, and coal are “producible … at more or less constant or indeed declining cost because of the improvements in the technology of drilling and exploring and so on.” This affirmed Julian Simon’s concept of the “ultimate resource,” human ingenuity. (Friedman, in fact, felt that Simon’s empirical work on human improvement should have won a Nobel Prize in economics.)

Near the end of his long career, Friedman weighed in on the global warming debate with a blurb for Thomas Gale Moore’s book for the Cato Institute, Climate of Fear: Why We Shouldn’t Worry About Global Warming (1999). Friedman opined:

Global greening from the CO2 fertilization effect is settled science, quite unlike high climate-sensitivity estimates generated by climate models that speculate about real-world feedback effects. Modest warming (global lukewarming), in fact, is positive in economic terms.

Protectionism has long been a rallying cry for government intervention to advantage certain firms and industries over competitors—all at the expense of consumers. “The infant industry argument is a smokescreen,” noted the Friedmans in Free to Choose (pp. 5–6). “The so-called infants never grow up.”

Today, cronyism marks the nuclear, wind, solar, ethanol, electric vehicle, and carbon-capture industries. Climate policies such as a carbon tax ignore the benefits side of the cost/benefit equation. Thankfully, however, price controls and depletionist thinking have all but disappeared, confirming Milton Friedman’s wisdom from many decades ago.

Editor’s Note: Milton Friedman was an economist’s economist. His book Free to Choose is must reading for anyone valuing freedom and liberty. His takedown of Phil Donahue (who never seemed to get it) was a classic and here it is for those of you who want to really grasp the power of civil argument:

Friedman’s observations on global warming may offend a few readers, but what he is saying is simply this; bogus predictions, hysteria and junk science are no way to conduct that argument either. One must acknowledge the benefits along with the costs, what is to be gained with what is lost and deal in facts. The facts support natural gas development as a way to lower CO2 and other emissions if we’re truly worried about global warming. Indeed, nothing else has accomplished so much, in so little time, with so little government involvement. That’s the essence of everything Milton Friedman has ever said and he was correct.