Hey City Comptroller Scott Stringer, Are You Against This, Too?

New York City Comptroller Scott Stringer says he hates natural gas, the City needs no more of the stuff and it’s a step backward. Does he hate this, too?

A few days ago I did a post about about New York City Comptroller Scott Stringer and his opposition to the NESE pipeline project. He seems determined to do the bidding of the city’s gentry class and ignore the needs of the poor for better heating systems and all New Yorkers for better air. He’s playing the green virtue signaling card. How far is he wiling to take it? Will he go backward and erase the progress made? Will he tell NYU, for example, to tear out its innovative co-generation plant?

Here’s some of what Scott Stringer has said:

The building of the pipeline would be a “a monumental step backwards” in meeting this target, according to Scott Stringer, comptroller of New York City.

And, then tweeted out with this: 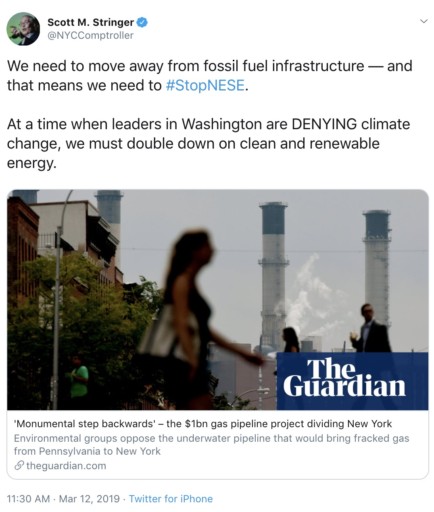 This ignores the huge progress NYC has made in cleaning its air by replacing its heavy oil boilers with new much cleaner natural gas boilers and the need to keep up the progress by doing the same for public housing projects. But, it’s more than this. Also ignored is huge progress made with innovative projects that use natural gas to lower costs and clean the environment at the same time; projects such as NYU’s co-generation plant. Here’s the NYU news release from 2011(emphasis added):

Located beneath a renovated public plaza at 251 Mercer Street, the new CoGen plant approaches 90% energy efficiency while producing 13.4 megawatts of electricity—twice the output of the previous system.

“I am pleased that NYU, already one of the country’s greenest universities, continues to improve its sustainability profile as a responsive partner to the mayor’s plan for a greener New York,” said Michael Alfano, NYU’S executive vice-president.  “I also am proud of our operations team that brought this difficult project on line, and delighted that we have been able to take some pressure off of the electric grid in New York City.”

The comprehensive, state-of-the-art $125 million CoGen upgrade and public plaza installation project took 28 months to complete. It is the one of the largest private CoGen plants in New York City, and provides electricity to 22 NYU buildings, up from 7 buildings with the old plant.  The new NYU CoGen system will also produce heat and hot and chilled water to 37 buildings on the Washington Square Campus, and is expected to save the university $5-8 million in energy related costs per year…

CoGen is the cornerstone of NYU’s 2010 Climate Action Plan (CAP), a comprehensive approach to reducing the University’s carbon footprint and enhancing its overall sustainability.  NYU’s CAP was spurred on in part by the signing of Mayor Bloomberg’s PlaNYC Climate Challenge, which calls on all city colleges and universities to voluntarily reduce greenhouse gas emissions by 30 percent by 2017…

Prior to the CoGen upgrade, NYU had made significant progress in reducing its greenhouse gas emissions, cutting them by 20-25% over just four years, from a peak of ~179,000 Metric Tons Carbon Equivalent (MTCE) in 2006 to ~125,000 MTCE in 2010. With the addition of CoGen coming on line, NYU’s total emissions are expected to drop approximately 20% more, to about ~98,500 MTCE.   This not only fulfills the Mayor’s Challenge, but surpasses it by an additional ~10% reduction in greenhouse gas emissions, reaching a total of ~40%.

“NYU’s new cogeneration plant will save money, reduce carbon emissions and improve the reliability our electrical grid,” said David Bragdon, Director of the Mayor’s Office of Long-term Planning and Sustainability.  “The project is a model of achieving the triple bottom-line that will move the City closer to achieving its PlaNYC goal of reducing emissions 30% by 2030.”

Read the whole story to get additional facts and here is a neat graphic explaining the whole thing: 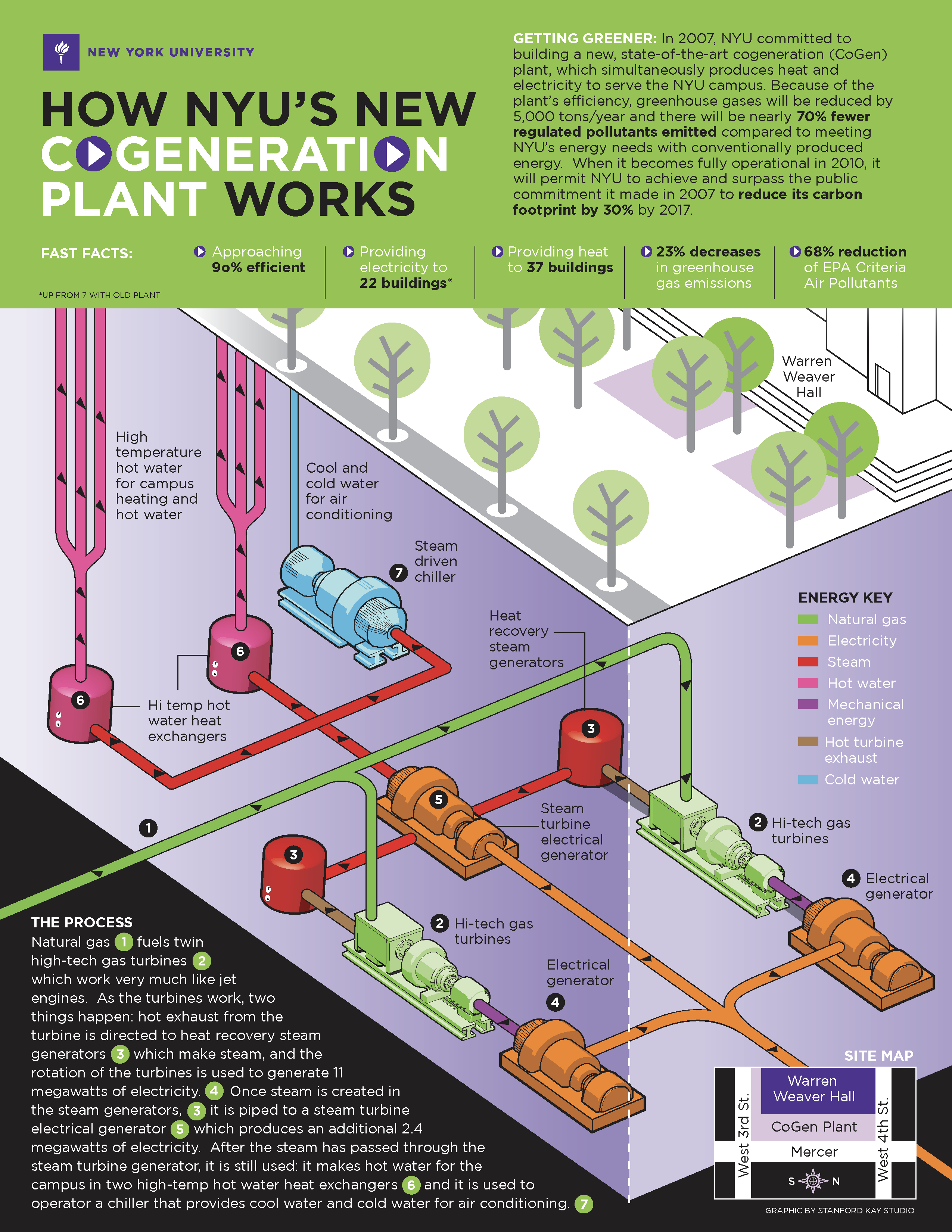 So, Scott Stringer, are you prepared to rip this out? Do you condemn it, too? Do you stand with the folks who would deny any more opportunities to do this? Tell us, Scott, tell us, please!