EU’s commissioner for energy, Kadri Simson, told the bloc’s energy ministers on Monday that there is a strong link between technology, recovery, and climate-neutral ambition.

Simson discussed Europe’s €750 ($846.3) billion coronavirus recovery fund and the role of clean energy technologies for the future low carbon economy. She described it as a “sizeable, balanced plan, with green deal investment at its heart,” Kallanish Energy reports. 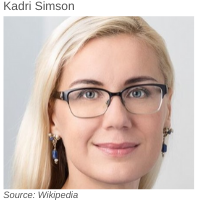 The bloc has earmarked €150 ($169.2) billion to invest in energy infrastructure, storage, batteries, hydrogen, and other projects. The EU will also launch a system of alliances, such as a new Hydrogen Alliance, to enable public-private collaboration to advance the technology, she said in the meeting.

“The recovery plan is designed to help accelerate innovative investment and address the serious challenges we face,” Simson said in a press statement. “The energy sector will benefit in many ways, from critical infrastructure support to new energy storage technologies, like batteries, clean hydrogen, and fuel cell applications.”

In a separate statement, energy ministers of Germany, Austria, France, the Netherlands, Belgium, and Luxembourg said the funding for clean hydrogen should be backed by legislation. The countries are calling for EU clean hydrogen production targets for 2030 and a regulatory framework.

Most of the 8 million tonnes of hydrogen consumed in the EU per year come from fossil fuels, rather than renewable power. The clean hydrogen, also known as green hydrogen, is produced from electrolysis powered by renewable sources such as wind and solar. Hydrogen produced from gas is known as blue hydrogen.