Ecocide Reveals the Totalitarian Heart of the Climate Cult

[Editor’s Note: Ecocide is the latest effort by the Church of Climate, a/k/a the Climate Cult; a totalitarian movement out to control every single aspect of others’ lives.]

The Climate Church of deep ecology has its hell-on-earth for nonbelievers–prison, and by insinuation, death sentencing. The crime is ecocide. 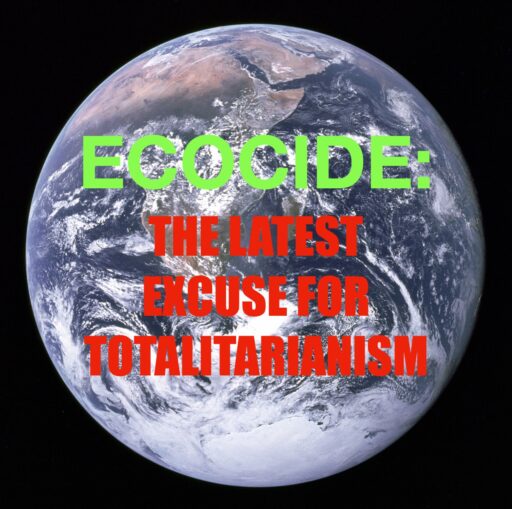 Enter Inside Climate News, a far-left climate website that features “the campaign to make ‘ecocide’ an international crime.” With nary a nod to private property rights to address some if not many commons problems (real, not manufactured), we the living are the culprit.

“On every continent,” the website explains, “humans have left their mark in the form of massive environmental destruction…”

…deforestation in Brazil; strip mining in Canada’s Tar Sands; the devastation of West Africa’s fisheries; the obliterations of landscapes and ecosystems by the wars in Iraq and Afghanistan.

The idea of ecocide is a cri de cour  for repair and reparation, against all odds. Inside Climate News, in partnership with NBC and Undark, report on the moral and legal case for accountability.

ICN founder David Sassoon pulls out the hammer in “Ecocide: Should Destruction of the Planet Be a Crime?” with the descriptor:

To prosecute and imprison political leaders and corporate executives would require a parsing of legal boundaries and a recalibration of criminal accountability.

His analogy is Nazi war crimes:

At many moments in history, humanity’s propensity for wanton destruction has demanded legal and moral restraint. One of those times, seared into modern consciousness, came at the close of World War II, when Soviet and Allied forces liberated the Nazi concentration camps at Auschwitz and Dachau.

Photographs and newsreels shocked the conscience of the world. Never had so many witnessed evidence of a crime so heinous, and so without precedent, that a new word—genocide—was needed to describe it, and in short order, a new framework of international justice was erected to outlaw it.

Another crime of similar magnitude is now at large in the world. It is not as conspicuous and repugnant as a death camp, but its power of mass destruction, if left unchecked, would strike the lives of hundreds of millions of people. A movement to outlaw it, too, is gaining momentum. That crime is called ecocide.

Sassoon brings in the Catholic Pope for justification:

Pope Francis, shepherd of 1.2 billion Catholics, has been among the most outspoken, calling out the wrongdoing with the full force of his office. He has advocated for the prosecution of corporations for ecocide, defining it as the damage or destruction of natural resources, flora and fauna or ecosystems. He has also suggested enumerating it as a sin in the Catechism of the Catholic Church, a reference text for teaching the doctrine of the faith.

David Sasson’s profile, of an authoritarian and a totalitarian-in-waiting, follows in the way of explanation for these views:

David Sassoon is the founder and publisher of Inside Climate News. He has been a writer, editor and publisher for 30 years, involved with public interest issues: human rights, cultural preservation, healthcare, education and the environment.

In 2003 he began researching the business case for climate action for the Rockefeller Brothers Fund. … As an outgrowth of his research, Sassoon founded a blog in 2007 which has grown and evolved into Inside Climate News.

He earned his undergraduate degree from Harvard University and a master’s degree from Columbia University’s Graduate School of Journalism.

The Church of Climate is ever more desperate, with a tripartite carbon-based energy boom underway (what is new?) and the climate math becoming impossible to reconcile with reality. Meanwhile scientific scrutiny grows toward climate modeling in general and the erroneous claims of negative climate trends, from temperature to droughts to floods to wildfires to sea level rise to ….

Climate authoritarianism is a dangerous fringe movement that must be exposed for its means and ends. Climate policy, not physical climate change, is the real risk and threat for better human living now and into the deep future.

Editor’s Note: Remember precisely for whom David Sassoon, the promoter of this Stalinist “ecocide,” propaganda initiative, works. Like Bill McKibben, he is simply another paid shill for the Rockefeller family and its special interests. This is their latest attack on us.

Reposted, with permission, from Master Resource.