A Colorado health agency, under the thumb of a fractivist governor, is using air quality modeling, with no connection to reality, to trash oil and gas.

What do you call a “study” that includes this?

Two aspects of the modeling need to be understood, and they are

1. the overall “uncertainty” of the results, which may include contributions from both known data gaps / uncertainty / variability in the modeling and unknown factors which affect the accuracy of risk results, and

2. the potential for under- or over-estimation of health risks.

Well, I call it pseudo-science. The fact it is accompanied by reams of charts, formulas and statistics doesn’t change my opinion. A model is still a model and fraught with the risks of modeling error that can only ascertained after the fact by comparing projections with reality. Where they don’t compare, we are left with pseudo-science and that’s exactly what we have with a new Colorado health study; at least that how it appears to me. 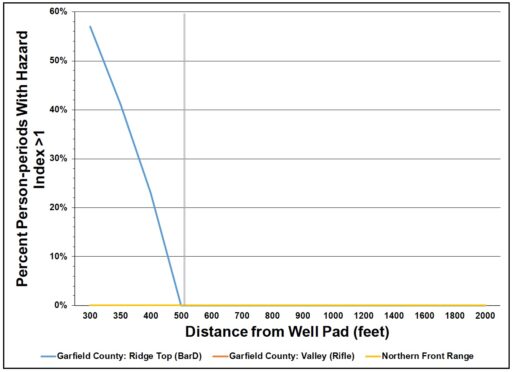 The study, conducted by government rent seeking consulting giant ICF, is entitled “Final Report: Human Health Risk Assessment for Oil & Gas Operations in Colorado.” It was contracted by the Colorado Department of Public Health and Environment and in not so subtle fashion promotes the idea of up to 2,000 feet setbacks from oil and gas wells on the theory there could short-term acute exposures that might cause various health issues

Yet, as Lynn Granger, Executive Director of the Colorado Petroleum Council points out, a 2017 publication by the same Colorado health agency reflected more than 10,000 air measurements and concluded that based on the current setback requirements there was no immediate need for a public health response.”

She further notes ICF modeled 2014-2015 data instead of measuring current air quality data. Moreover, the very same Colorado health agency has conducted eight monitoring assessments since 2017 from Boulder to Broomfield to Weld County, all of which “show no acute adverse health impacts.” It’s also important to note the following:

And, despite these big holes in the work, let’s not ignore these statements from this Colorado health study (emphasis added):

Ideologically aligned media, of course, will never report these statements. They only desire what will fit the fractivist template. And, a study based on modeling and old data is one that is almost guaranteed to deliver, which brings us to a most important question. Namely, who exactly is ICF and why were they hired to do this study?

Well, as noted above, ICF is primarily a government rent seeking consultant. A recent investor presentation indicates 65% of its revenue comes from government contracts. Additionally, much of its commercial business is oriented toward state-mandated utility transformation with respect to distributed energy and grid modernization; renewables promotion in other words. ICF is also one of those companies playing the renewables shell game itself; bragging it utilizes “100% net renewable electricity in the U.S. via renewable energy certificates” and “net zero carbon status since 2006 due to investments in high-quality carbon offsets.”

So, what we have is a study that just happens to set the stage for a highly restrictive and unjustified set of oil and gas setbacks for a fractivist governor who would like nothing better than to destroy the industry. How convenient. But, it’s par for the course, isn’t it?