Climate Justice Is Just An Excuse to Impose Green Ideology

Roger Caiazza (on the subject of)
Independent Researcher and Publisher,
Pragmatic Environmentalist of New York

[Editor’s Note: Climate justice is another of those excuses intended to employ global warming theology for the purpose of pursuing socialistic agendas on the part of the left. Rogers explains in a post found here, a condensed version of which follows.]

Section 75-0111 of the Climate Leadership and Community Protection Act (CLCPA) mandates the Department of Environmental Conservation establish a Climate Justice Working Group.  I provided background information on the requirements and the membership in an earlier post.  The post also includes documentation describing the education and affiliation of the members of the working group.

The CLCPA states that each advisory panel is required to coordinate with the climate justice working group while developing their enabling strategies.  There also are requirements the draft and final scoping plan have to be developed in consultation with the climate justice advisory group.  I interpret that to be a consulting role but it is apparent this working group believes they have the responsibility to be the final arbiter whether the advisory panel enabling strategy recommendations adequately address climate justice.  As noted in my previous post, there is little technical expertise on this panel to support that role.  More importantly, their vision excludes any consideration of feasibility or competing interests.

My words cannot fully capture the tenor and content of the presentation by Elizabeth Yeampierre, the Executive Director of UPROSE.  It would be worth your while to listen to her seven-minute lecture to the Climate Action Council starting at 8:00 in the meeting recording.  I say lecture because my impression was that she believes the climate justice working group has a mission not open to compromise, that the solutions have to come from the communities because they are most impacted, and those solutions have to not only address climate change but also co-pollutants.  Unfortunately, the basis for this climate justice framework is technically flawed and does not recognize there is no zero-risk way to provide reliable, abundant, and affordable energy.

The rationale for the climate justice framework is that climate change is truly an existential threat.  According to Yeampierre, the next Intergovernmental Panel on Climate Change report is going show there are thresholds for climate breakdown that will doom humanity because humans cannot evolve or develop new ecosystems to handle drastic climate shifts. However, humans have adapted their ecosystem to live across an incredible range of temperatures.

Yeampierre goes on to point out we need to act now because of the recent heat waves in the Pacific Northwest.  The definitive take down of that claim has been prepared by University of Washington meteorologist Dr. Cliff Mass.  The weather and climate of that region is his particular specialty and he explains the “specific ingredients that led to the heatwave include a high-amplitude ridge of high pressure and an approaching low-pressure area that “supercharged” the warming” and showed “global warming only contributed a small about (1-2F) of the 30-40F heatwave and proposed global warming amplification mechanisms (e.g., droughts, enhanced ridging/high pressure) cannot explain the severe heat event”.  Again, her rationale for drastic action has no basis in fact.

The following justice lens diagram describes the Green New Deal which not only calls for public policy to address climate change but to also achieve other social goals and resource efficiency.  The diagram shows the plan to move from today’s “extractive” economy to a future “living” economy.  While I could certainly do a post just on this diagram, I will only summarize it below for the context of the Climate Justice Working Group. 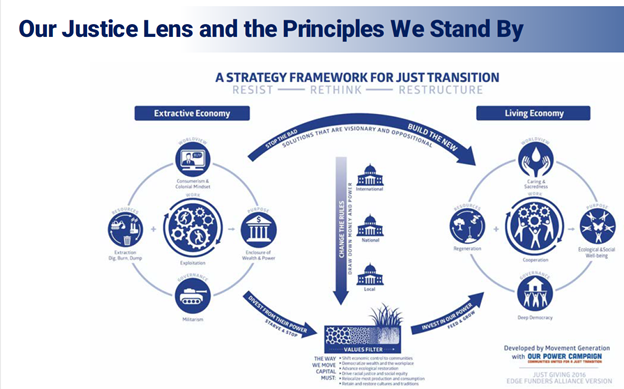 On the left side of the diagram is today’s extractive economy where work’s purpose is exploitation.  The worldview is consumerism and colonial mindset.  Resources are to be extracted – “dig, burn, dump”.  Governance is militarism.

The right side of the diagram describes the living economy where work and cooperation produce ecological and social well-being.  According to this, resources have to be regenerated, the worldview is caring and sacredness, and governance is by “deep” democracy.

The center of the diagram describes the plan to convert to the living economy.  Solutions that are “visionary and oppositional” will stop the bad and build the new.  If we “starve and stop” to “divest from their power” we can “feed and grow” to “invest in our power” through a values filter.  This filter moves capital by shifting economic control to communities, democratizing wealth and the workplace, advancing ecological restoration, driving racial justice and social equity, making most production and consumption locally based and retaining and restoring cultures and traditions.  All this occurs when the rules are changed to “draw down money and power”.

I really don’t think the majority of the politicians who voted for the CLCPA thought the law to mitigate greenhouse gases to address climate change was also a mandate to move to a socialist utopia as described in this diagram.  I am certain the majority of the voters would not endorse this plan.  The real question is how far is the Cuomo Administration going to go down this path to appease the environmental justice demographic but not alienate the rest of society.

In Yeampierre’s naïve view of the energy sector front line communities must defend lands and rivers from mines, power plants, mega-projects and industrial agriculture by expanding agro-ecology and transformative economies while building community-controlled energy and food systems.  This post is only going to address energy systems that she believes should be dominated by renewables like wind and solar.  The reality is that converting to wind and solar will have an extractive impact on lands and rivers which will be enormous because the rare earth metals required for those technologies require extensive mining.  Because wind and solar are diffuse, vast tracts of land will be blanketed with turbines and panels.  When those turbines and panels reach the end of their useful life they will have to be decommissioned and the materials disposed in landfills.  My point is that when looked at holistically the probable impact of renewable energy on communities will be larger but, for the urban environmental justice activists, the impacts will be moved from their communities elsewhere out of sight and out of mind.

The urban environmental justice activists’ most hypocritical position regards health impacts.  Yeampierre advocates for a zero-risk approach to air pollution.  It is not enough to meet (with the exception of ozone in New York) the National Ambient Air Quality Standards (NAAQS) that have protected the health and welfare in the United States for decades.  The fact that the concentrations of all the air pollutants have dropped dramatically since the Clean Air Act is irrelevant because there still are elevated levels in disadvantaged communities relative to elsewhere even if those levels are less than the air quality standards.

The activists argue, for example, that power plants in urban areas have to be replaced by renewable energy and energy storage based on epidemiological statistics that claim excess health impacts from air pollution, amongst other confounding factors.  That position is hypocritical because the extraction of the rare earth metals necessary for energy storage and renewable energy is done almost exclusively overseas where the health and environment protections are much weaker and labor protections nearly non-existent. As a result, there are real health and welfare impacts directly attributable to their solution as opposed to the statistical constructs supporting their position.

There also is hypocrisy associated with their description of the extractive economy.  The unfortunate fact is that child labor is involved in the African mining industry.  It is sad and telling about their objectives that the Climate Justice Working Group has not called for New York renewable energy and energy storage facilities to require their mineral suppliers are certified by the Responsible Mineral Initiative or something similar.

The working group summarized their observations regarding Transportation Advisory Panel recommendations.”  Abigail McHugh-Grifa, the Executive Director of the Rochester People’s Climate Coalition, presented the overview (starting at 14:45 in the meeting recording).  She holds a Ph.D. in Music Education, but “decided to give up her career in music to dedicate herself to climate work”.  She exemplifies my concern that the members of this working group lack the background and education to provide meaningful comments on technical issues.

McHugh-Grifa complained the transportation recommendations did not consider the potential effect of climate refugees.  She said:

As climate conditions worsen, we in our region anticipate that we will see an increase in climate migrants and refugees that move to our area from other parts of the states and countries.  There is no indication that the transportation panel has taken these kinds of population shifts into account or is considering how the transportation needs of any given region may change over the coming decades

I agree climate refugees will be a problem in New York but it will not be because of people moving into the state.  Instead, if these draconian policies come to pass, there will be a mass exodus out of state.

The working group, and for that matter the transportation advisory panel vision for transportation, is out of touch with the reality of transportation in the suburbs and rural areas.  For example, McHugh-Grifa stated that doubling the service would still be inadequate.  That brings up the question just how much of an improvement to service would be necessary to entice people away from their personal cars.  I cannot conceive of any scenario where I would use public transit to go grocery shopping.  As disappointing as it may be for public transit advocates, the fact is that outside of New York City housing has evolved around the use of automobiles.  Changing that dynamic would require massive transformation of the rest of the state’s infrastructure.

McHugh-Grifa concluded we need systemic change so we “respectfully request the transportation panel give it another go, ideally with more input from Environmental Justice groups.” Really?

I must also mention Yeampierre’s response to a question about replicable solutions that could be expanded to further climate justice goals.  It illustrates my concern about lack of expertise on advocacy panels setting policy.  She argues that current projects using the industrial waterfront have been successful and suggests using the waterfront as a delivery hub.  She indicates this could be a way to connect to economically depressed farmers upstate by way of refrigerated barges to the waterfront to distribute healthy food.  This is a non-starter.  There is a reason that barges are used for bulk commodities that do not have delivery time constraints – they are slow.  Healthy food is fresh food and the range of suppliers within even a day of the New York City waterfront is so small they could not possibly supply any meaningful fraction of the needs of the City.

I don’t think anyone disagrees with the concept that disproportionate environmental impacts on disadvantaged communities are a bad thing and should be addressed.  Unfortunately, the Climate Justice Working Group approach to this is fatally flawed.  On one hand their overview of climate justice did not include the concept of compromise so their comments on the panel recommendations were not constructive criticisms, they were demands for change.  Their apparent goal is elimination of all environmental impacts to disadvantaged communities.

The reality of environmental regulation is that trade-offs and compromises are necessary because zero-risk policies are impossible to implement.  More importantly, pushing for minimal risks in one location means that risks are increased elsewhere as I explained relative to the rare earth metals used for energy storage. Simply put, the Climate Justice Working Group’s rationales and recommendations are driven more by special interests and emotion than fact.