CLCPA Legislation Spurred by Cuomo Should Be Repealed!

[Editor’s Note: Roger looks at where the Empire State stands with its climate goals and concludes the only realistic hope is to repeal the CLCPA right now.]

According to a New York State Department of Environmental Conservation (DEC) bulletin dated May 10, 2021, the Advisory Panels to the Climate Action Council have all submitted recommendations for consideration in the Scoping Plan to achieve greenhouse gas (GHG) emissions reductions economy-wide.   Until this point, the State has not formally released its estimates of current GHG emissions but the strategies mention the GHG emissions for the baseline in 1990 and the most recent year, 2018, so we can estimate where New York stands.

I have written extensively on implementation of the CLCPA closely because its implementation affects my future as a New Yorker.  I summarized implementation details at CLCPA Summary Implementation Requirements.  I have described the law in general, evaluated its feasibility, estimated costs, described supporting regulations, listed the scoping plan strategies, summarized some of the meetings and complained that its advocates constantly confuse weather and climate.  The opinions expressed in this post do not reflect the position of any of my previous employers or any other company I have been associated with, these comments are mine alone.

In late 2020, the New York Department of Environmental Conservation (DEC) adopted Part 496 that defined the emissions limits for the CLCPA.  That law sets targets based on 1990 emissions and the regulation developed the emission inventory for 1990.  This year DEC will start producing an annual summary of current emissions but they have not released anything for public comment yet.

According to a New York State Department of Environmental Conservation (DEC) bulletin dated May 10, 2021, the Advisory Panels to the Climate Action Council have all submitted recommendations for consideration in the Scoping Plan to achieve greenhouse gas (GHG) emissions reductions economy-wide and this is a “critical milestone to advance New York’s nation-leading Climate Law”.  A recent post summarizes the status of the implementation program and includes links to the recommendations themselves.  Buried in the strategies is a slide that lists the 1990 emissions, the current 2018 emissions and makes projections for 2030 and 2050 after the proposed strategies are adopted.  This post summarizes the 2018 emissions.

I am very familiar with emissions from the power generation sector and know that there have been significant reductions.  However, the CLCPA mandates unique methods to calculate emissions including a requirement to include upstream emissions from fossil fuel extraction and I have no particular expertise relative to emissions from other sectors so I was unsure where the state stands relative to the CLCPA emissions.

I extracted the emissions from the presentations for the agriculture and forestry, energy-intensive and trade-exposed industries, power generation, energy efficiency and housing, waste and transportation advisory panel strategies presented to the Climate Action Council.  In 1990 total GHG emissions were 409 million metric tons (MMt) of CO2e and according to these preliminary estimates there were 377 MMt of CO2e in 2018.  This represents a reduction of only 7.8%. 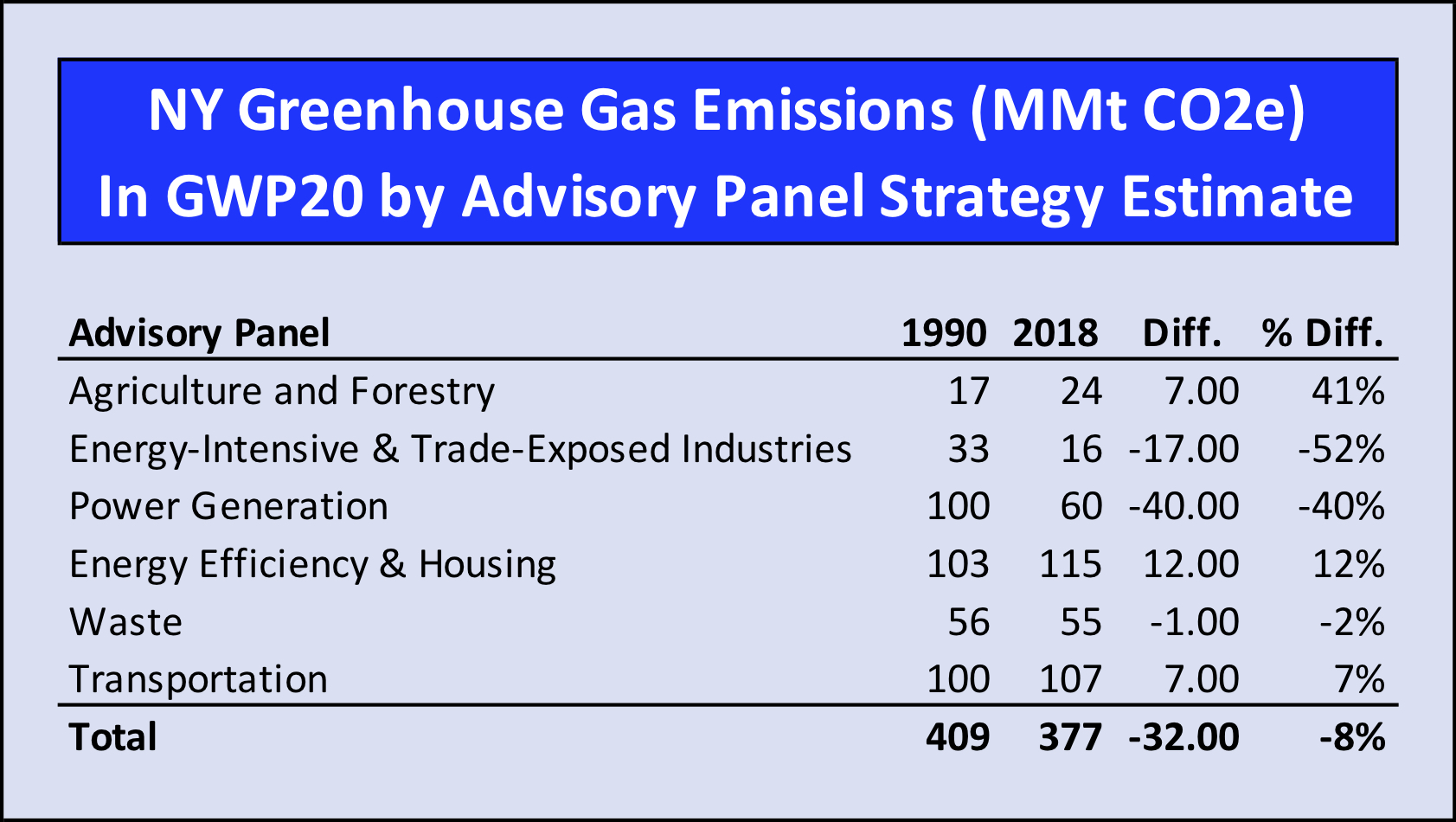 Emissions were available in six categories.  Three went down and three went up between 1990 and 2018.  In order to determine the viability of the emission reduction programs it is instructive to look at why power generation and the energy-intensive & trade-exposed industries emissions went down.

It includes information on the primary consumption of energy for electricity generation by different types of generation that explains why GHG emissions have gone down so much.  In 1990 relatively high CO2 emitting coal and residual oil facilities generated 42% of the energy but in 2017 they only provided 1% an overall reduction of 98%.  Total energy for electric generation went down only 4% so other sources picked up the slack.  Natural gas use went up 68%, nuclear went up 76% and net imports went up nearly five times and wind and solar only contributed 25% relative to the increase in natural gas use.

It gets worse though.  Consider the three main sources of replacement power that displaced coal and residual oil in the power generation sector that caused the biggest emission reductions since 1990.  Coal has been outlawed and residual oil is close to de minimus levels so no further reductions are possible by fuel switching.  Nuclear had a big increase in power but that benefit will evaporate with the inexplicable decision to shut down Indian Point.  It does not seem to be good policy to rely on imported power from both a reliability and economic impact of displaced jobs standpoint.

Also of note is that the fuel switching to natural gas that occurred was despite New York policy that outlawed the technology that made that an economic switch.  There is a massive technological challenge to get further reductions of emissions in the power generation sector necessary to meet the CLCPA targets and the costs will be enormous.

It gets even worse when you consider that getting reductions in the other sectors not only face technological challenges and affordability limits but also require significant changes to lifestyles and personal choices.  Consider transportation: electric vehicles and public transit must be adopted by a significant fraction of the so far unsuspecting public.

It may just be me but I am beginning to suspect that the reason that the 2018 emission inventory has not been released is because of the implications of these numbers.  I cannot imagine any way to meet the 2030 CLCPA targets that would not risk massive political repercussions.  It is in the best interests of the state to repeal the CLCPA.