[Editor’s Note: China is on a mission to leverage its dominance in rare earth minerals production to put the U.S. into a vice with its “green energy” plans.]

Prompted by a worldwide chip shortage already impacting automobile production, President Biden in February signed an executive order directing a 100-day broad review of supply chains for critical materials for semiconductors and large-capacity batteries, including rare-earth elements. It builds on analyses, reports and executive orders initiated several years ago by the Trump Administration.

The stark truth that this review should highlight is that the U.S. and its Western allies have been left behind at the starting gate in a race only China seems to have realized was taking place.

The Chinese began building their now-dominant supply chain decades ago. The U.S. has been 100% net import reliant on rare-earth elements, with 80 percent of those imports sourced from China. 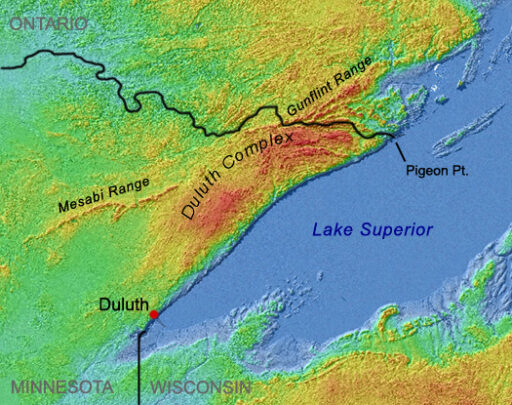 The Duluth Complex is one America’s deposits of rare earth minerals that can help us compete with China but personally and politically compromised Joe Xiden has obstructed permits applications by PolyMet Mining to develop it.

Technology metals consultant Jack Lipton has described five steps in a total rare-earth supply chain. Mining comes first, followed by extraction of the rare-earths from mining concentrates and preparation of clean, pre-PLS (pregnant leach solution) mixed rare-earths products. (Actually, there is another step that precedes mining, at least in Western countries – gaining permission to mine – and it is often the most difficult and most time-consuming step of all.)

China today controls roughly 80% of the world’s rare-earth production capacity, 43 percent of exports, and nearly 90 percent of refining. No other nation today has a functional complete rare-earth supply chain. This means the U.S. and its Western allies have a lot of catching up to do; Western nations have also failed to develop and carry out strategic minerals strategies.

One reason for these strategic shortcomings has been strong opposition to mining, and especially to the very word “radioactive” (for rare-earth deposits linked to thorium and uranium found in monazite ores) from constituencies opposed to environmentally challenging mining practices.

Energy consultant David Blackmon recently asserted that, “There will be no successful ‘energy transition’ or ‘Green New Deal’ implementation in the United States,” unless companies are allowed to access this country’s own plentiful supplies of copper, nickel, cobalt and rare-earth minerals. Yet, he laments, the most strident proponents of decarbonization and renewable energy are often the most strident opponents of domestic mining of these critical minerals.

Anti-mining sentiments remain strong, especially among environmental pressure groups and professional staff at regulatory agencies. For example, a recent article pointed out that offshore wind turbines that are essential to President Biden’s call for 30,000 megawatts of electricity from offshore wind by 2030 require 63,000 pounds of copper per turbine – 8 tons of copper per megawatt of energy output.

World copper prices jumped in May to an all-time high of $10,440 per metric ton, a number perhaps buoyed by Biden Administration decisions to pause the permitting of two major U.S. copper mines – the Rio Tinto/BHP Group Resolution Copper joint venture in Arizona and the PolyMet NorthMet copper-nickel-precious metals mine in Minnesota. Notably, PolyMet began its quest for permits 17 years ago after leasing mineral rights for the NorthMet deposit in 2000.

This slow-walked approach to energy and materials policy cannot stand if the U.S. is to build reliable, affordable supply chains for critical materials. TechMet Chairman and CEO Brian Menell recently stated, “To remain a leader in the energy and automotive areas, the U.S. must secure adequate supplies of the metals necessary to power the 21st Century’s industrial revolution.”

Menell’s company “builds projects that produce, process and recycle ‘technology metals’ critical for electric vehicles, renewable energy systems and energy storage.” He urged the federal government to work with the private sector to enhance supply chains among partners and allies. He called for “massive funding” to transform the U.S. critical metals industry and ramp up global production to help meet geometrically growing demand.

There is a sense of urgency in Menell’s comments, affirmed by Andrew Miller, product director at Benchmark Mineral Intelligence. Miller told NPR’s Marketplace that, sure, “you can build a new electric vehicle factory in a couple of years,” but “to fund, start and refine the processing from a new raw material facility, you’re looking at five to seven years.” And that’s with fast-track permitting that steamrolls citizen and pressure group opposition.

In a four-part series addressing Chinese dominance in the rare-earths industry, Jamil Hijazi and James Kennedy explained that China built its rare-earth industry as part of a carefully designed nationalistic strategy for world domination, one not motivated by the quest for private profits.

Menell points out that China’s rare-earths dominance is “the result of decades of successful central planning, to secure the minerals required to develop technologies across strategic sectors such as energy, auto and defense.”

President Biden’s executive order supporting the concept of resilient, diverse, secure supply chains is certainly admirable. However, Menell says, the United States must make the supply of critical minerals a central part of both domestic and foreign policy.

Menell notes that the Biden Administration also needs to educate the American public that the mining and processing of critical materials can be done with much lower environmental impacts by American companies than by Chinese firms, and that America’s economic well-being depends heavily on an integrated rare-earths value chain.

“The United States cannot afford to be a bystander in the most significant transformation of the global industrial and technological landscape since the invention of the steam engine,” Menell emphasized.

Failure to take bold, ongoing action will doom the USA – and other Western nations – to submission to China’s iron grip on 21st Century technology.

Unchallenged, China could choose to expand its empire southward and eastward, as Western voices are muted by their utter dependence on Chinese “generosity” in supplying materials for smart phones, wind turbines, electric vehicles, defense and aerospace technologies, and more. China could also continue to force U.S. and other Western companies to “share” their most valuable corporate and national security secrets, and even their profits, with their Chinese “benefactors.”

Editor’s Note: Again and again, we see the first priority of the Xiden administration is catering to well off environmentalists such as the NRDC gang (the Rockefeller family and friends), whose special interests are somehow considered more important than those of America. It’s no coincidence, either, that the NRDC gang loves China more than the US.