California Is No Model, So Why Does New York Still Mimic It?

California Is No Model, So Why Does New York Still Mimic It?

Roger Caiazza (on the subject of)
Independent Researcher and Publisher,
Pragmatic Environmentalist of New York

[Editor’s Note: California is the last place any state should look for ideas unless programmed failure is the objective, but that’s exactly what New York looks to as a model.]

The Climate Leadership and Community Protection Act (Climate Act) has a legal mandate for New York State greenhouse gas emissions to meet the ambitious net-zero goal by 2050.  I have previously noted that there are members of the Climate Action Council who deny the challenge of the electric grid transition from existing sources to one dependent upon wind and solar resources.  This article describes a couple of recent articles that highlight transition issues.

Everyone wants to do right by the environment to the extent that they can afford to and not be unduly burdened by the effects of environmental policies.  I submitted comments on the Plan and have written extensively on implementation of New York’s response to that risk because I believe the ambitions for a zero-emissions economy embodied in the Climate Act outstrip available renewable technology such that this supposed cure will be worse than the disease.  The opinions expressed in this post do not reflect the position of any of my previous employers or any other company I have been associated with, these comments are mine alone.

The Climate Act establishes a “Net Zero” target (85% reduction and 15% offset of emissions) by 2050. The Climate Action Council is responsible for preparing the Scoping Plan that will “achieve the State’s bold clean energy and climate agenda”.  They were assisted by Advisory Panels who developed and presented strategies to the meet the goals to the Council.

Those strategies were used to develop the integration analysis prepared by the New York State Energy Research and Development Authority (NYSERDA) and its consultants that tried to quantify the impact of the strategies.  That material was used to write a Draft Scoping Plan that was released for public comment at the end of 2021. The Climate Action Council states that it will revise the Draft Scoping Plan based on comments and other expert input in 2022 with the goal to finalize the Scoping Plan by the end of the year.

In my comments on the Draft Scoping Plan I noted that the Plan and the Climate Action Council have downplayed the reliability risks of the Climate Act transition to renewables.

Equally troubling there are vocal members of the Climate Action Council that deny the existence of any implementation issues associated with a renewable energy resource dependent electric system. At the May 26, 2022 Climate Action Council meeting, Paul Shepson Dean, School of Marine and Atmospheric Sciences at Stony Brook University claimed that the conversion cannot be unreliable at 23:39 of the recording.  Robert Howarth, Professor, Ecology and Environmental Biology at Cornell (starting at 32:52 of the recording) said: “Clearly one can run a 100% renewable grid with reliability”.   In this article, I describe a couple of recent articles that highlight some of the issues associated with this conversion that the academics overlook.

I have prepared a page that documents the work of various authors that describe the complexities of the energy system and problems associated with over-reliance on intermittent wind and solar generating resources.  One of the resources is a series of posts at Climate Etc by Planning Engineer who posts under the pseudonym because he wanted to frankly share his personal views and not have them tied directly to his current employer.  Recently he posted an article entitled Will California “learn” to avoid Peak Rolling Blackouts? that provides a good overview of upcoming reliability issues.

The article presents a graph that shows recorded peaks and the projected 2022 value that caused issues earlier in September.  Then he explains that:

The most basic planning criteria is that a system should be able to survive the loss of the largest generating resource and the most critical transmission element during a peak load with no loss of load and no severe voltage declines or undamped system oscillations. Looking at the variability in load levels here, no particular challenges to planners are apparent. If “green” resources were capable of replacing traditional resources with minor adjustments, we would not see the problems we are seeing. 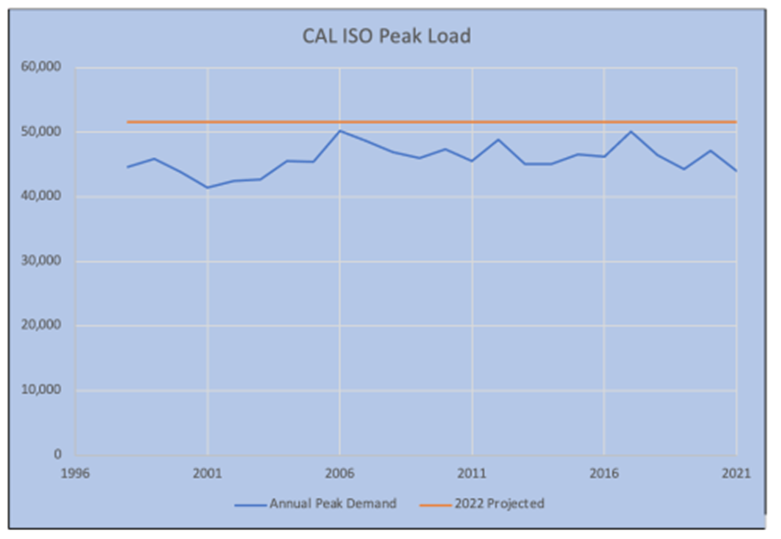 He goes on to explain why there was a problem.

Why is California challenged now and why might it continue to see challenges in the future?  Primarily because the focus on green energy is increasing the percentage of “green” intermittent resources. “Green” resources are not as dependable as traditional rotating machinery nor do they support the system as well. It is likely that these resources have been credited with more ability to provide capacity than is warranted, and when the rubber meets the road, they don’t perform as “expected.”

There has been a big push to make “green” options appear much more economic and capable than they are so that they will be more competitive.

Subsidization of “green” resources by traditional uses occurs in many ways. In addition to crediting “green” resources above their dependable capability, others subsidies include directing costs associated with such additions to others.

Being honest makes the “green” dream a much harder sell. Assuming that “green” resources work well saves other investment in the grid. This subterfuge tends to limit the cost increase that should be imposed by these resources, but does so at the cost of reliability. This tradeoff takes a while to see as we have built the electric grids to have very high levels of reliability at the bulk level.

In the short term it looks like you are getting a cleaner, equally reliable system at a moderate cost increase. But as penetration levels increase, cost get higher and reliability gets much worse.

He points out that California policy makers are responsible for resource investment, resource allocations and how and when grid improvements are made to enhance reliability. Earlier in September there were reliability issues and extreme weather was blamed.  Obviously, the planning failed to account for weather but proper reliability planning has to account for the effects of extreme weather.  Planning Engineer points out that if “there truly was something unusual about the weather as driven by climate change, shouldn’t this have been anticipated by those responsible?”

Ideally the power system represents the best balance between economics, reliability and public responsibility. California has reached a balance skewed by false expectations that “green” resources cannot meet. Creating a balance that looks at the true costs and reliability impacts of green resources should benefit electric users in California.

Gail Tverberg writing at Our Finite World explains that one of the unappreciated benefits of fossil fuels is their ability to store energy that can be used to provide heat in the winter.  She notes that:

In some ways, the lack of availability of fuels for winter is a canary in the coal mine regarding future energy shortages. People have been concerned about oil shortages, but winter fuel shortages are, in many ways, just as bad. They can result in people “freezing in the dark.”

The article goes on to describe eight issues involved with winter energy use.  She points out that “batteries are suitable for fine-tuning the precise time during a 24-hour period solar electricity is used” but they cannot be scaled up to store solar energy from summer to winter.  There is no long duration energy storage resource available.

The article addresses hydro and wind energy resources in this context.  She argues that “ramping up hydro is not a solution to our problem of inadequate energy for heat in winter” and that “wind energy is not greatly better than hydro and solar, in terms of variability and poor timing of supply”.

She also lists five specific reasons that “when wind and solar are added to the grid, the challenges and costs become increasingly great”.  All of these concerns are concerning by themselves and the combination of problems directly contradicts the Climate Act narrative that there are no serious challenges to reliability.  Two deserve attention.  The inherent variability of wind and solar generation creates power transients and those fluctuations need to be addressed.

The problem is that the magnitude of this problem is new and it is likely that learning how to address it is difficult to anticipate so corrections will be reactions to problems.  Supporters of the Climate Act transition seem to think that existing wind, solar and energy storage resources only need to be scaled up to the quantity needed.  What they miss is that the more resources built the less those resources will be used.  Tverberg points out that low-capacity factors hurts energy return on investment payback.  All of these issues should be considered but have not been addressed in the Scoping Plan. 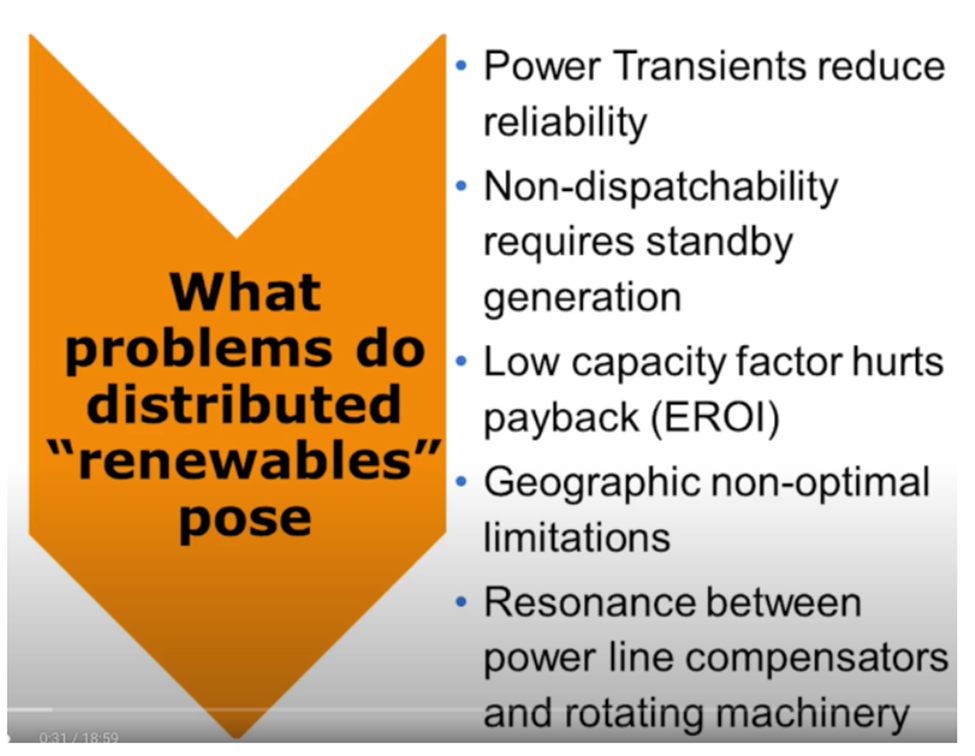 Tverberg also point that the word “sustainable” has created unrealistic expectations with respect to intermittent wind and solar electricity.  She illustrates this issue as follows:

A person in the wind turbine repair industry once told me, “Wind turbines run on a steady supply of replacement parts.” Individual parts may be made to last 20-years, or even longer, but there are so many parts that some are likely to need replacement long before that time. An article in Windpower Engineering says, “Turbine gearboxes are typically given a design life of 20 years, but few make it past the 10-year mark.”

She notes that “energy modeling has led to unrealistic expectations for wind and solar”.  This is evident in the Integration Analysis projections.  It should be obvious that the Scoping Plan projections for future generating resources have to be reconciled with the work of the New York Independent System Operator but, so far, no plan has been announced to do that.

Finally, Tverberg argues that current pricing plans that enable the growth of wind and solar electricity have consequences.  They are displacing existing dispatchable resources such that those resources are no longer viable.  The result is “pushing a number of areas in the world toward a “freezing-in-the-dark” problem”.  She concludes: “The world is a very long way from producing enough wind and solar to solve its energy problems, especially its need for heat in winter.”

I cannot improve on Planning Engineer’s conclusion.  Substitute New York for California and his conclusion sums up the issue that the Climate Action Council should address in the Scoping Plan:

Will California learn to avoid peak rolling blackouts?  If reliability were a primary concern, this situation shouldn’t bubble up again in a few years. California should be able to properly credit the ability of its power resources and match them to projected weather ensuring adequate power. If other priorities prevent responsible steps to ensure reliability, then those priorities, not the weather, should claim responsibility for the consequences. If California wants to continue as they have, they should be honest and make statements such as the following:

This is the end of affordable, reliable electric service as we understood it for most of the last 50 years. We are choosing to go with “green “technology to deal with the climate crisis. Keeping past reliability levels will raise your costs tremendously. As we try to put on limit on costs this will decrease your reliability. At times the power will not be there. We’ve all got help each other out.

Roger Caiazza blogs on New York energy and environmental issues at Pragmatic Environmentalist of New York.  This represents his opinion and not the opinion of any of his previous employers or any other company with which he has been associated.