Vic Furman and Frank Chernega visited with some Binghamton University students recently and offered them “fracing” spelling lesson and some other insights.

This week, Frank Chernega, another guest blogger here at NaturalGasNOW, and I were invited back a second year to talk with Binghamton University students on the subject of High Volume Hydraulic Fracturing. Frank and I spent two days, in fact, addressing about 40 students for about two hours each day on the subject of gas drilling in New York. We also addressed the dismal refusal of Governor Cuomo to recognize the Southern Tier’s economic needs or understand how his policies are hurting rather than helping. 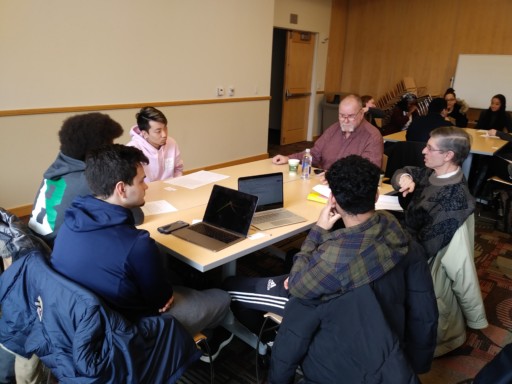 We were much better armed this year with proof of the corrupted activism of Food & Water Watch and the Catskill MountainKeeper, thanks to the sworn deposition of Craig Stevens. The deposition was discussed during a Susquehanna County Court of Common Pleas hearing on February 4th as part of the ongoing “Pigs To Rigs” lawsuit.

The deposition itself was also made a part of the record. It exposes the activist-for-hire Stevens who carried the brown water jug of who knows what everywhere across the country. He received as much $6,000 per month paid by either Food & Water Watch or Catskill MountainKeeper using funds provided by the former.

The first day, Frank and I worked together answering students who had visited two pro-gas websites; that of the Joint Landowners Coalition of New York (JLC) and NaturalGasNOW. They came at us with very good questions. They noticed that the JLC website was mostly about the politics, and asked about our mission statement to promote and foster safe drilling and education. We explained the JLC was self funded thru bottle drives, scrap metal drives and membership donations.

We explained our efforts of going to different town boards all over upstate New York to educate board members on all aspects, pro and con, when and if the state moratorium on drilling was lifted. We pointed out several towns even contacted us to come and present.

We shared with the students how, even though our cause raised a few hundred thousand dollars over several years, we were no match for the $2+ million given, for example, to anti-drilling activist Walter Hang by the Park Foundation and Rockefeller family through the Sustainable Markets Foundation. Or, the $275,000+ given by Park Foundation to Josh Fox to promote his anti-gas films, including his well debunked film Gasland.

Frank presented the students with documents from a U.S. Senate investigation that questioned whether some of the money donated to the New York anti fracking groups was, in fact, from other countries such as Russia. Collusion?

I told them the story of a lawyer working on behalf of the Park Foundation who told one town board our state is already the victim of illegal dumping from Pennsylvania gas companies.

This supposed officer of the court told the town board that desperate famers in New York were allowing frack waster to be dumped in their cornfields for cash and even claimed to have witnessed the dumping himself. He was asked, after his statement, what he did for a living and he admitted he was an attorney. He was asked if he understood criminal law to which he also replied, “yes.” He was then asked if he knew what they were dumping in the cornfield was frack waste water and he again replied “yes.” He was then asked whether he had a cell phone (“yes’) and whether he used it to call the police (“no’). He grew suspiciously quiet the rest of the meeting.

They students asked about NaturalGasNOW and right up front we informed them Tom was supported by the industry and reader subscriptions. We told them he reports on the facts and offers human interest perspectives on the fracking debate that are often submitted by unpaid contributors and guest bloggers such as Frank and myself. We also introduced them to the best natural gas newspaper in the northeast, that being Marcellus Drilling News.

The students asked great questions about nuclear, hydro, solar and fossil fuels and how we felt about them. We addressed the science we’ve learned and they were very receptive. We told them all forms of energy have their place and complement one another.

We discussed the downsides of nuclear using Fukishima and Three Mile Island as examples. We told the students about Governor Cuomo’s allowing the building three natural gas power plants to replace the aged Indian Point Power Plant, a nuclear facility in Westchester, New York. Interestingly, the NYC metro area students at Binghamton University knew very well what was going on back home, some living within the shadow of the plant and its many alarms.

We talked about hydro-electric power and its devastating effects on the ecosystems of lakes and rivers. We talked about solar and how it only works during daylight and intermittently at that. Some were aware, from sites such this one, of the devastation to China’s land and rivers from solar panel manufacturing and pollution caused by mining for neodymium, a rare earth metal used in the storing of solar energy.

The question asked most was “what about all the pollution we read about on Google?” To that I asked all the students to spell fracing to which they knowingly replied F-R-A-C-K-I-N-G, and they were stunned when I told them they were wrong. I explained how the antis smartest move was adding the “K” to make it sound dirty, allowing the hijacking of the internet and making the first 25-30 pages of a search on “fracking” point to information from anti-drilling interest groups.

When they asked about water pollution, I told them never from fracking, and only from surface spills which were rare and always mitigated. We told them of this 2011 House hearing committee on HVHF in which Lisa Jackson of the EPA testified to never having a water aquifer polluted by the process.

It was a great two days of interaction and we hope to do it again!