U.S. energy exports are growing in a big way and are already leading to U.S. energy dominance, a result thought impossible by many until the shale revolution.

The International Energy Agency’s (IEA) five-year outlook expects that the United States will overtake Russia and potentially Saudi Arabia as an oil exporter by 2024. The U.S. shale revolution—thanks to hydraulic fracturing and directional drilling—has made the United States one of the world’s largest energy producers and potentially the largest oil exporter globally within five years.

Forecasters expect the United States to become a net energy exporter by 2021, with its liquids production increasing by a record 2.2 million barrels per day in 2018. This one-year increase is slightly less than the total annual production of Kuwait and slightly more than the production of Nigeria, the 6th and 7th producers in the world, respectively. IEA expects the United States to provide 70 percent of the increase in global liquids production capacity by 2024—4 million barrels per day. Shale oil and liquefied natural gas (LNG) are increasingly in demand with Asian countries, particularly China. 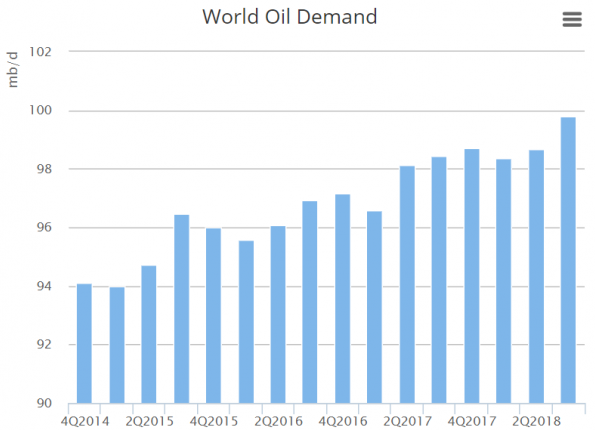 IEA expects the increased demand for liquids to come from increased demand for petrochemicals and aviation. The petrochemicals industry is expected to add 2.2 million barrels per day to oil consumption through 2024, accounting for 30 percent of the growth in global demand. Due to rising incomes in developing countries, aviation demand is expected to grow strongly with more airport construction and more airline fleets. Asia is expected to account for 75 percent of the increase in aviation fuel demand through 2024 with China having the largest absolute increase and India having the fastest rate of growth at 8.2 percent per year.

The global rate of growth in gasoline demand is expected to decline to less than 1 percent per year due to ongoing efficiency improvements. But, the rate of growth is twice as high in developing countries as rising income levels lead to more vehicle purchases.

The marine regulation requiring lower sulfur emissions results in a change to fuel specifications as well as an increase in the demand for ship scrubbers. The high sulfur fuel being displaced may be consumed in the power sector, most likely in Middle East plants.

The average global product barrel is getting lighter as fuel oil demand falls and petrochemical demand increases, which puts the United States in a good position as a supplier of light crude types. Shale oil also helps to meet the new ship requirements and provides naphtha for the petrochemicals industry.

IEA expects the United States to provide the largest increase in oil production capacity over the next 5 years and to surpass Russia in oil exports by 2024. Other countries also help to increase non-OPEC oil capacity while OPEC capacity falls slightly due to production issues in Iran and Venezuela. The agency does not see oil demand peaking during this period.

The petrochemical and the aviation industries lead oil demand growth increases. The refinery industry will have to retool due to changes in bunker fuel sulfur emission levels and China is expected to have the largest refinery capacity by 2024, surpassing the United States. The United States is clearly leading the world in advances in drilling technologies and production capabilities.

Our energy future is looking better with each passing year.

Editor’s Note: As a further indication of what’s happening, it’s worth noting this news two days ago from from Energy Transfer LP, the developer of the Dakota Access and Mariner East pipelines, among many others:

Energy Transfer LP announced today it is expanding its presence in China to meet growing demand for ethane and liquid natural gas products by opening an office in Beijing, the first office for Energy Transfer outside the United States. This strategic move allows Energy Transfer to better leverage the increasing business opportunities in the exportation of much-needed energy products to the China and other Asian markets, and to facilitate growth across Energy Transfer’s diverse platform of assets.

Energy Transfer owns and operates one of the largest and most diversified portfolios of energy assets in the United States, with a strategic footprint in all of the major U.S. production basins. It is a publicly traded limited partnership with core operations that include complementary natural gas midstream, intrastate and interstate transportation and storage assets; crude oil, natural gas liquids (NGL) and refined product transportation and terminalling assets; NGL fractionation; and various acquisition and marketing assets.

That’s American product they’re talking about marketing to China and some of it is likely to be Marcellus and Utica (Appalachian Basin) shale gas. From Washington, Pennsylvania to Beijing, China; it’s another beautiful thing, another gift from the shale revolution.