Thermoformers: Would you believe a 12 percent gain? 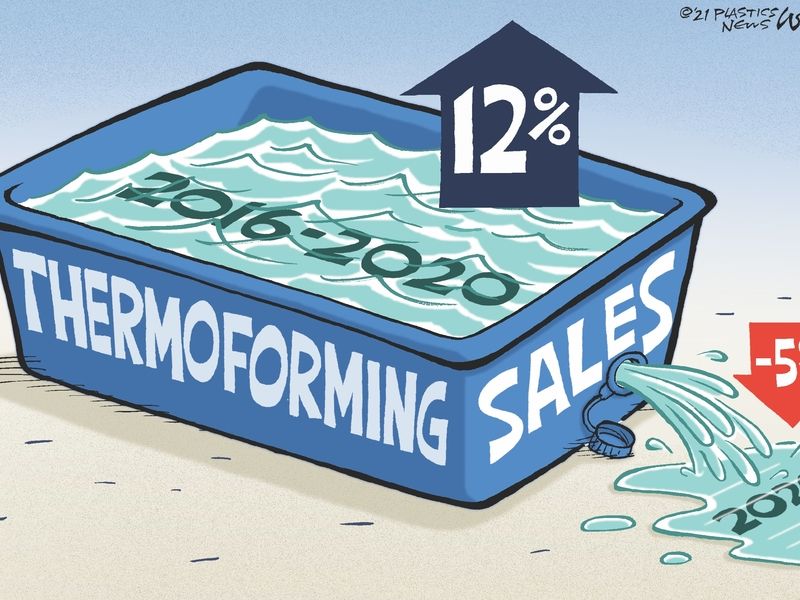 This week’s issue has our updated ranking of North American thermoformers, for the 2020 fiscal year. We were able to gather data for 217 companies totaling $13.6 billion in related sales.

Broken down by the two major thermoforming categories, 85 percent, or $11.6 billion, was generated from packaging. The remaining $2 billion, or 15 percent, was from industrial thermoforming.

Did thermoformers fair well in 2020? In a way, yes, and in a way, no. That’s one of my favorite answers because it’s all in the details.

Let’s look at last March and April, when many firms had to navigate statewide shutdowns. Once the plastics industry was deemed an essential business, owners needed to follow guidelines to keep their employees and customers safe. Financially, thermoformers took a hit in the first and second quarters. For those firms in our ranking with an early or midyear fiscal year end, the impact on sales was apparent.

Another hit, especially for large-volume commodity items such as food packaging including cups and lids, was the lower cost of virgin polypropylene and PET. Packaging makers passed through those 11 percent and 13 percent declines, respectively.

Only two companies in our top 10 had gains. One was Anchor Packaging LLC of St. Louis, which bought Panoramic Inc. in July 2020. The other was Kruger Brown Holdings LLC of Portage, Wis., which made headlines last year when it introduced a line of emergency and disaster relief beds.

While loads of companies across the country quickly began making personal protective equipment, including face shields, a large percentage of this production was donated to help communities fight the pandemic. That inspired our very popular editorial cartoon, “Save the People.”

This year we were able to add three companies to our list. Welcome to the ranking:

Our biggest movers were:

• Formco Plastics Inc. of Bensenville, Ill., moved up eight spaces to rank at No. 176.

• First Choice Packaging Solutions of Fremont, Ohio, moved up seven spaces to rank at No. 70.

• Integrated Thermoforming Systems Inc. of Aurora, Ill., moved up seven spaces to rank at No. 176.

The thermoformers rankings — and all our rankings and lists downloads — include full ranking data and address information for plant locations. These can be found in the Plastics News store at www.plasticsnews.com/data.

If you work for a company that is missing from the ranking, we would like to include you next time. Just send a note to Hollee Keller at [email protected] or mail your information to Plastics News, P.O. Box 790, Tallmadge, Ohio 44278. All our survey forms are available online at www.plasticsnews.com/section/ranking-surveys.

Keller is editorial research coordinator for Plastics News and author of the All Things Data blog. Follow her on Twitter @holleekeller.