Nonfossil Fuel Propaganda Not Enough to Hide the Truth

[Editor’s Note: EIA data shows nonfossil fuels have not made a significant dent in the complete dominance of fossil fuels energy sources and wind and solar aren’t even close]

The 21% number trumpeted by the EIA is quite misleading. Of that number, so-called renewables (wind and solar) represented a piddly 4.4% of all energy consumed. If you read or watch the average braindead CNN story, you’d think wind and solar are just about finished with bumping off oil and gas as our primary energy sources. (We sure hope you don’t watch CNN–it will dumb you down.) 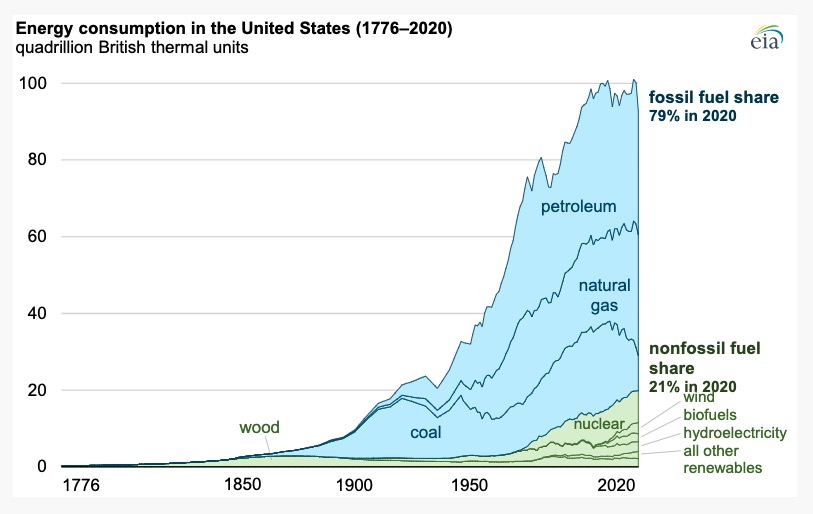 During 2020, responses to the COVID-19 pandemic and other economic factors significantly reduced energy use in the United States. The 7 quad decline in U.S. energy consumption last year was the largest annual decrease on record. Almost all of this decline came from less consumption of fossil fuels, especially petroleum used for transportation and coal used for electricity generation. In 2020, U.S. fossil fuel energy consumption, totaling 73 quads, was at its lowest level since 1991. 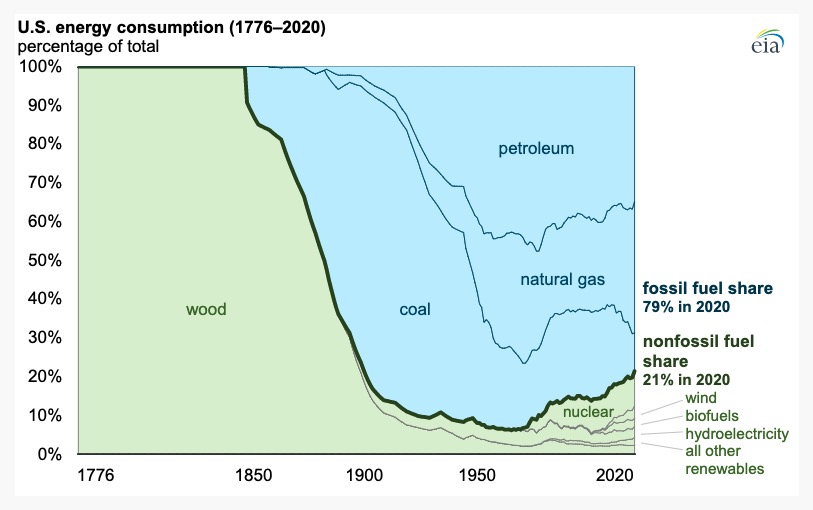 Our Monthly Energy Review’s pre-1949 estimates of U.S. energy use are based on two sources: Sam Schurr and Bruce Netschert’s Energy in the American Economy, 1850–1975: Its History and Prospects and the U.S. Department of Agriculture’s Circular No. 641, Fuel Wood Used in the United States 1630–1930.

Did you catch that second graph that shows burning wood provided more energy in the U.S. in 2020 than solar (“all other”)? Sometimes the truth is brutal. Wood provided almost as much energy as wind last year. How many billions (trillions) have we blown on nonfossil solar and wind? And with all that money spent, throwing a log in the woodstove still produces more energy in the U.S. Be careful wood burners–the Commie Left is coming for your wood stove. No, we’re not joking.

We pulled the EIA raw data showing primary energy production by source. Let’s break down the 2020 numbers by percentages, instead of raw quadrillion Btus. In 2020, the following sources provided the following percentages of energy in the U.S. (all figures rounded):

The real story here is that dry and wet natural gas together provided 43% of all the energy we consumed last year. Tell us again how we’ll be all renewables in the next 20 years. Ain’t….gonna….happen.