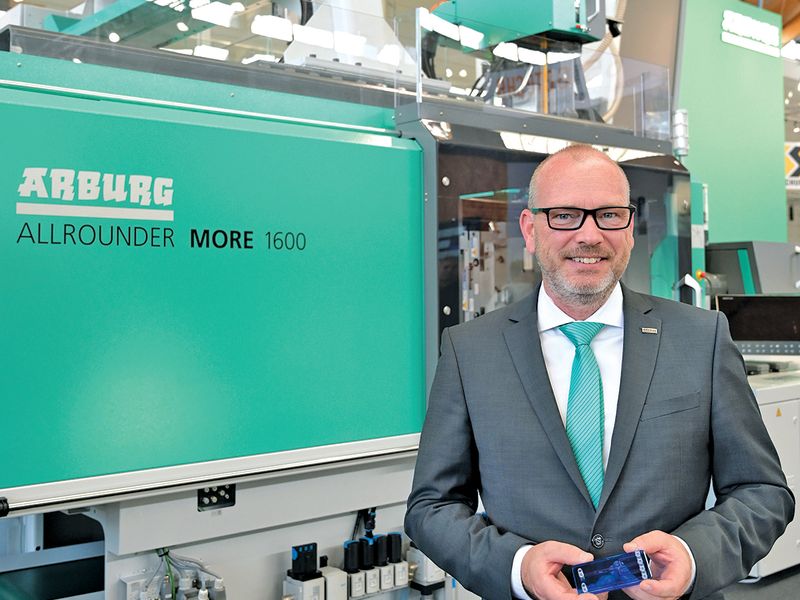 Lossburg, Germany-based Arburg GmbH & Co. KG is in a growth mode, not only physically with expansions and acquisitions but in terms of sales returning to levels of past years.

The company now has more than 3,300 employees worldwide, which is about 200 more than a year ago, and sales are trending upward.

“We are very satisfied with the incoming orders this year, and our production capacity utilization is likewise good. The order backlog already stretches into next year,” Jürgen Boll, managing director of finance controlling IT, said during a Fakuma 2021 news conference.

Because machine demand has led to increased delivery times in some places, Arburg is building up a small stock of warehoused machines in Lossburg to meet urgent requests for standard machines, such as the Allrounder golden electric, Boll said.

“We are also feeling the strain in the area of steel and aluminum sheets, as well as electronic components,” he said, but it hasn’t led to other problems.

“We have not had any production stoppages to date and were and are always able to deliver as planned,” Boll said. “The reason: Our supply chain strategy. We have planned ahead and stocked our warehouses well. We also benefit here from our central production location with a high proportion of in-house production as well as short, stable and reliable supply chains. This gives us a high degree of flexibility, when we have to react quickly in the event of parts availability bottlenecks.”

On a euro basis for machines and peripheral equipment through August 2021, sales were twice as high as in the same period in 2020, Boll said.

Germany continues to be Arburg’s largest single market and sales are picking up in other parts of Europe, according to Gerhard Böhm, managing director of sales and service.

“After the very deep trough in 2019 and a slight recovery in 2020, all countries are recording very pleasing growth this year,” he said. “Italy has returned to its old strength and automotive-heavy countries such as the Czech Republic are also recording significant growth.”

“Compared to the other countries, there was no significant slump here in 2019-2020, so that in the past difficult period, the good business in the USA was an important support for us,” he said.

The Asian countries of Malaysia, Thailand, Singapore, Indonesia continue to be heavily affected by COVID-19 with strict regulations in place, Böhm said.

“Nevertheless, we managed to get to a very decent level of incoming orders,” he said.

Meanwhile, Arburg is expanding its presence in China. Last year the company opened the Arburg Technology Factory (ATF) in Pinghu.

“For us, factory means that Allrounders made in Lossburg are customized on site in Pinghu on short notice,” Böhm said. “But factory also means that machines are automated by our local turnkey team and expanded into high-quality production systems.”

The 2,300-square-meter ATF has space for more than 60 injection molding machines. This facility allows Arburg to shorten delivery times and further expand the automation business.

Looking at sales by sector, Böhm said the automotive industry is picking up again with many new projects related to electromobility.

“Many pilot plants are just starting up,” he added. “It will still take some time before these products and models go into mass production, but if you look at the road maps of the major OEMs, it quickly becomes clear that further investments will be made in the next two to three years.”

However, Böhm cautioned, “It remains to be seen to what extent the current production stoppages due to the lack of semiconductors will influence the overall situation.”

Arburg is satisfied with the sales to the medical technology and packaging industries and is “well represented” in the electrical/electronics sector, Böhm also said.

Developments in the field of additive manufacturing (AM) are favorable for Arburg, too, he added, noting that Arburg is working with partners and customers on exciting projects in the medical technology and automotive sectors.

Arburg officials see additive manufacturing as an important and complementary production method in plastics processing for the future.

The company expanded its range of machines and expertise with the 2020 acquisition of RepRap GmbH followed by AMK Arnold Mükker GmbH & Co. KG this year.

The acquisition of AMK, a development partner and supplier in the field of drives that is now called AMKmotion, will help Arburg advance the technology, he added.

“Thanks to this acquisition, we now have the entire drive train — in other words, everything that moves the machine — in our own hands,” Boll said. “We can optimize the dynamics of the machine or the energy requirement more easily.”

AMKmotion products are installed in many machines that place extremely high demands on drive systems, for example machines for the packaging industry, Boll also noted.

“This technological know-how can now be used even more effectively and in a more targeted manner for the further development of our injection molding machines,” he said.

Boll pointed out that the acquired companies weren’t integrated into the familiar and complex structures of the Arburg organization.

“Instead, they will be able to develop as independently and flexibly as possible in their respective market segments,” he said. “At the same time, however, synergies are being used to fuel their success within the framework of cooperation among the family.”

Arburg also has focused on how to sustainably mass produce items as part of its initiative called arburgGREENworld.

“Our common goal is to make the best possible use of the many possibilities offered by the important resource that is plastic, to produce high-quality plastic products economically, to conserve resources and to close the recycling loop,” Böhm said.

The company is the exclusive injection molding machine partner for the R-cycle program, which calls for recycling-related properties to be identified on packaging during production through machine-readable markings.

Digital watermarks that carry information about the packaging type, material and usage are molded onto products for R-Cycle’s program called Holy Grail 2.0 as well as another effort called CurveCode.

At Fakuma 2021, Arburg is molding cups and containers that can be sorted using “HolyGrail” and “CurveCode” markings.

In one demonstration, the mold for espresso cups on the Allrounder 270 S compact is engraved with a CurveCode that’s specific to the material. This code is transferred to the molded part so that the cups can be recycled after use, said Guido Frohnhaus, managing director of technology and engineering.

HolyGrail requirements can be met by in-mold labeling products on an Allrounder.

Waste sorting plants will then be able to identify the recyclable packaging, which will help establish a functioning circular economy.

The used packaging is scanned on the sorting line with a high-resolution camera that detects and decodes the digital watermark. The packaging is then sorted into corresponding streams based on specified attributes including food, non-food or polymer types.

The goal is to create more accurate sorting streams and higher quality recyclates to be channeled back into the plastic packaging value chain.

“Digitalization is therefore making an important contribution to resource conservation and the circular economy,” Frohnhaus said.

Arburg also is offering a recyclate package for Allrounder presses. The package will give plastics processors access to a range of different controller functions and special equipment for plasticizing to ensure that recyclates can be processed safely.

“And most important of all: The new recyclate package is available for all Allrounders and can also be retrofitted. This means our customers can process recyclates,” Frohnhaus said.

Arburg also is offering new digital features and a “smart” injection molding application for improving production efficiency. One new feature is the “customer upload” function in the “MachineCenter” app of the customer portal. With this service, customers can also integrate non-Arburg equipment.

Customers that use “arburgXworld” will have the option of testing the Industry 4.0 assistance packages for free for 182 days.

Two other new assistance functions, which are part of the Gestica brand control system — the aXw Control CycleAssist and the aXw Control EnergyAssist — help improve cycle time and energy efficiency.

Also, the Arburg FlowPilot combines a cooling water manifold close to the mold with temperature and flow control.